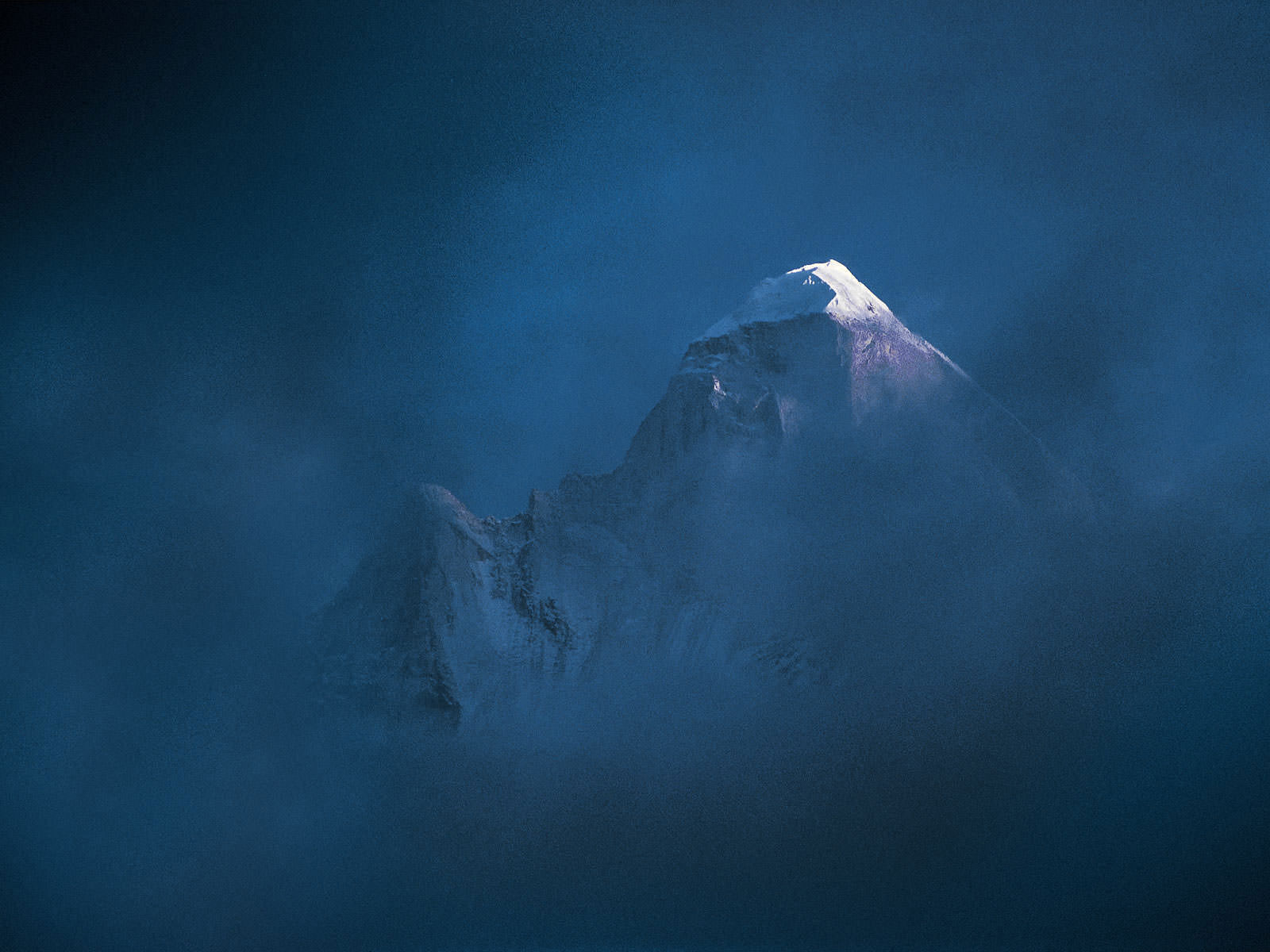 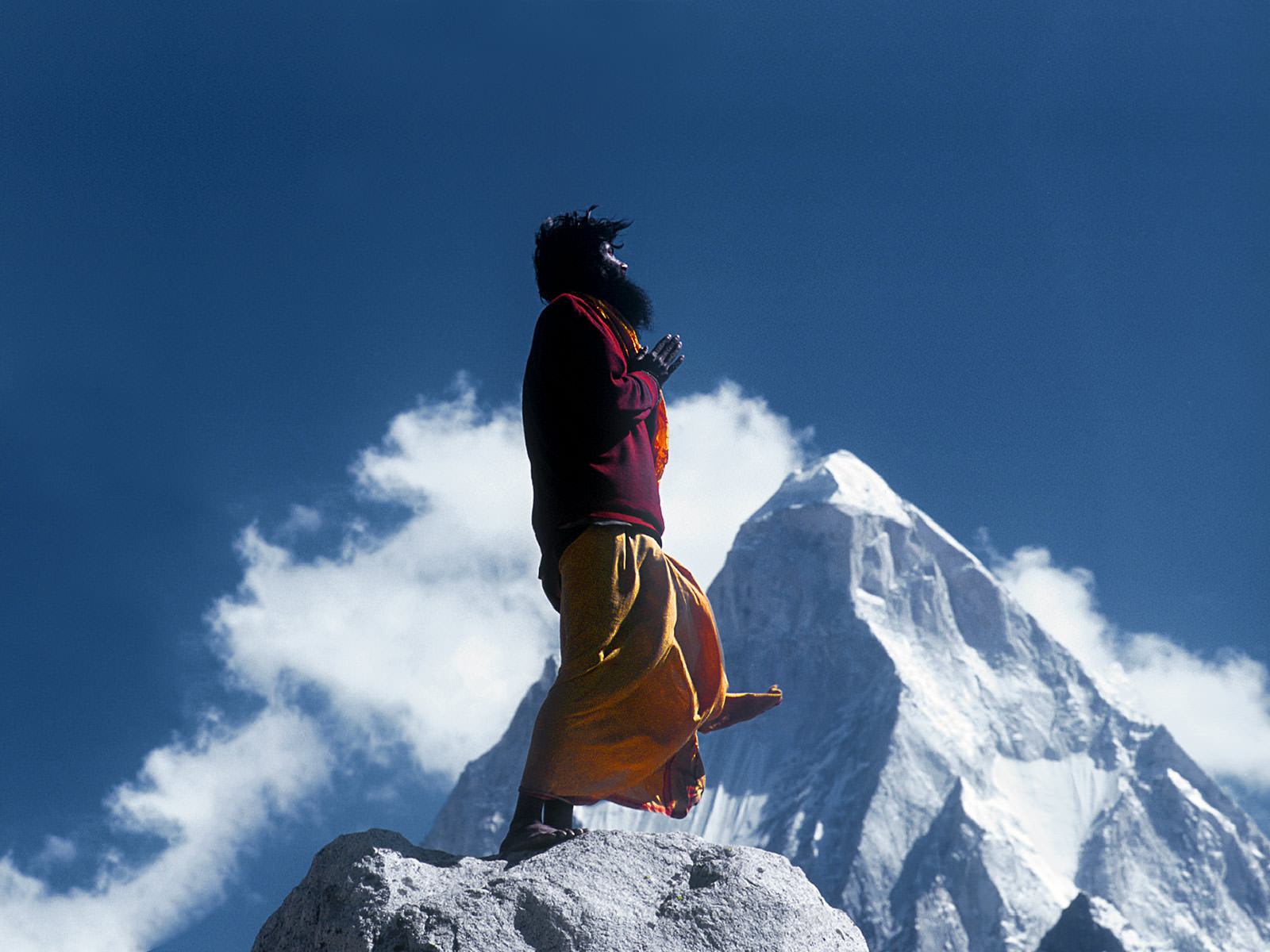 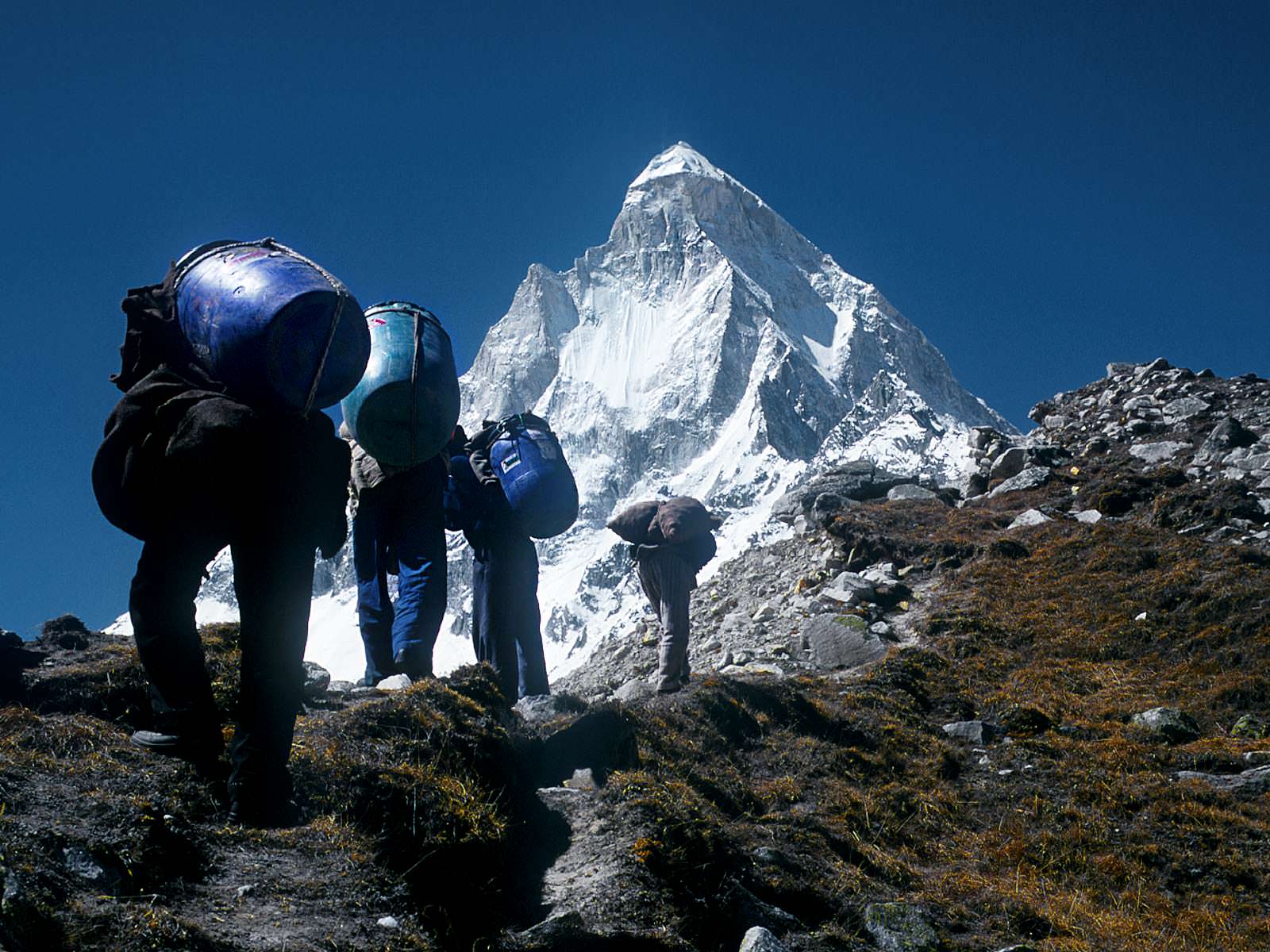 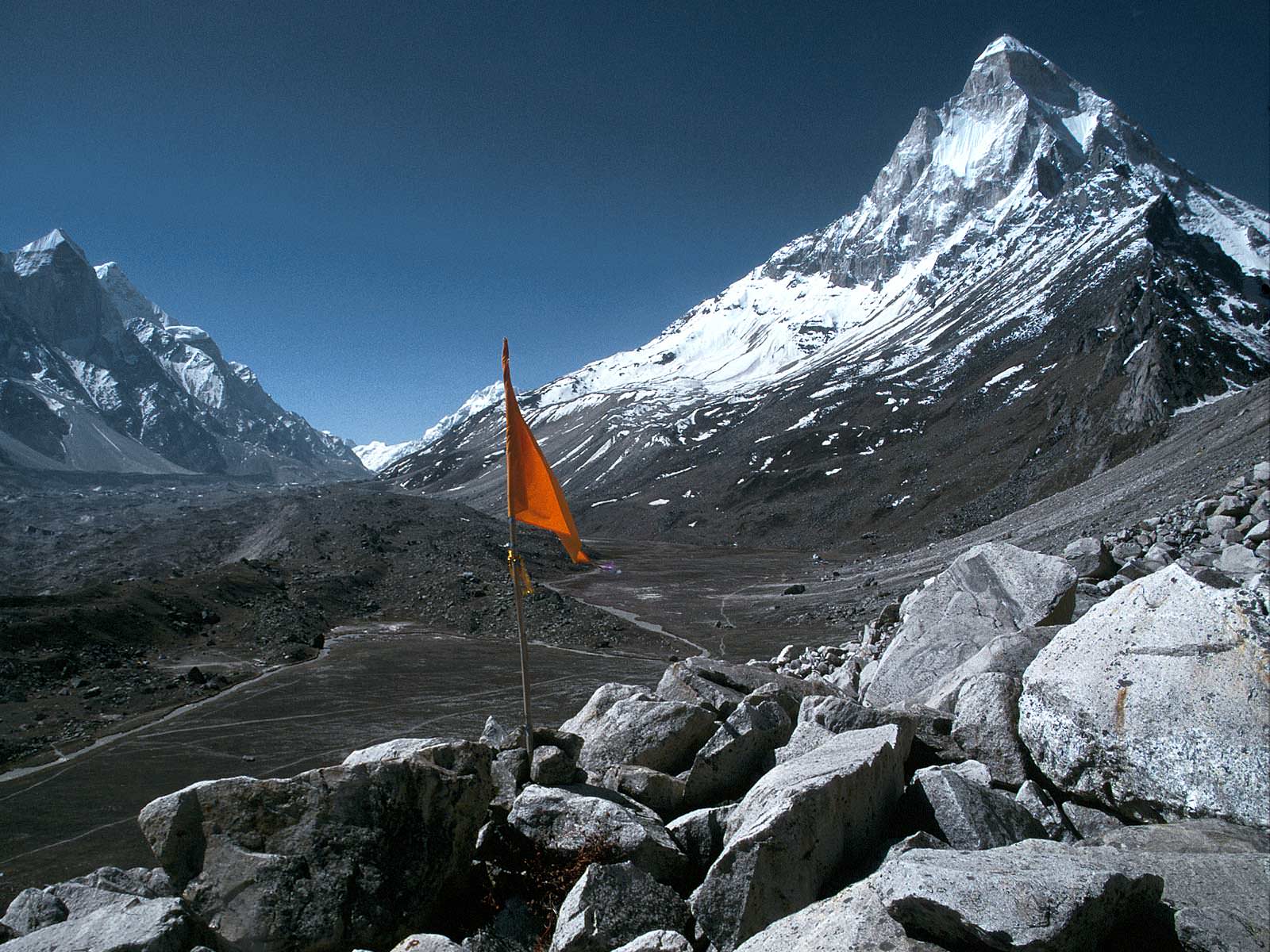 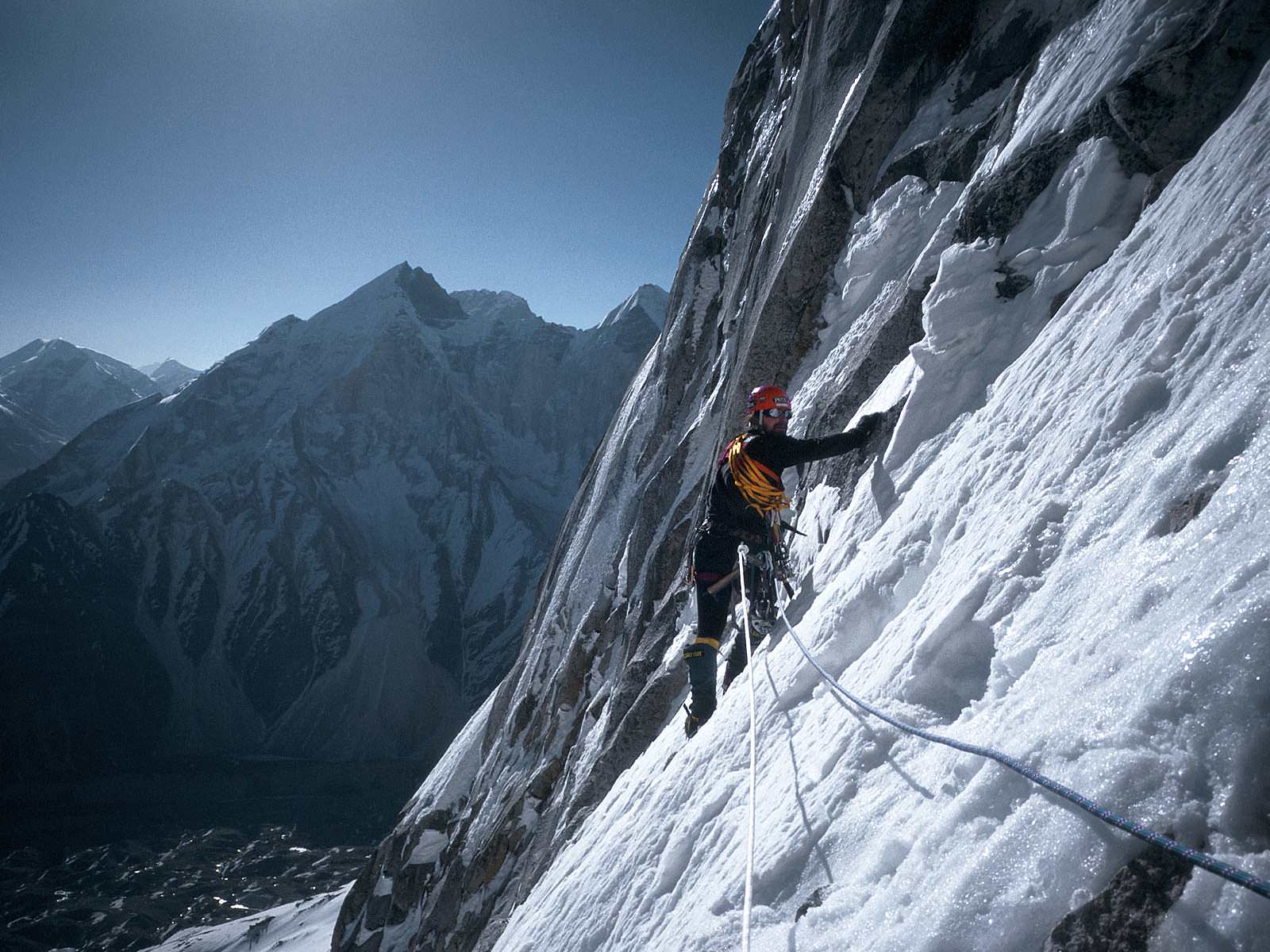 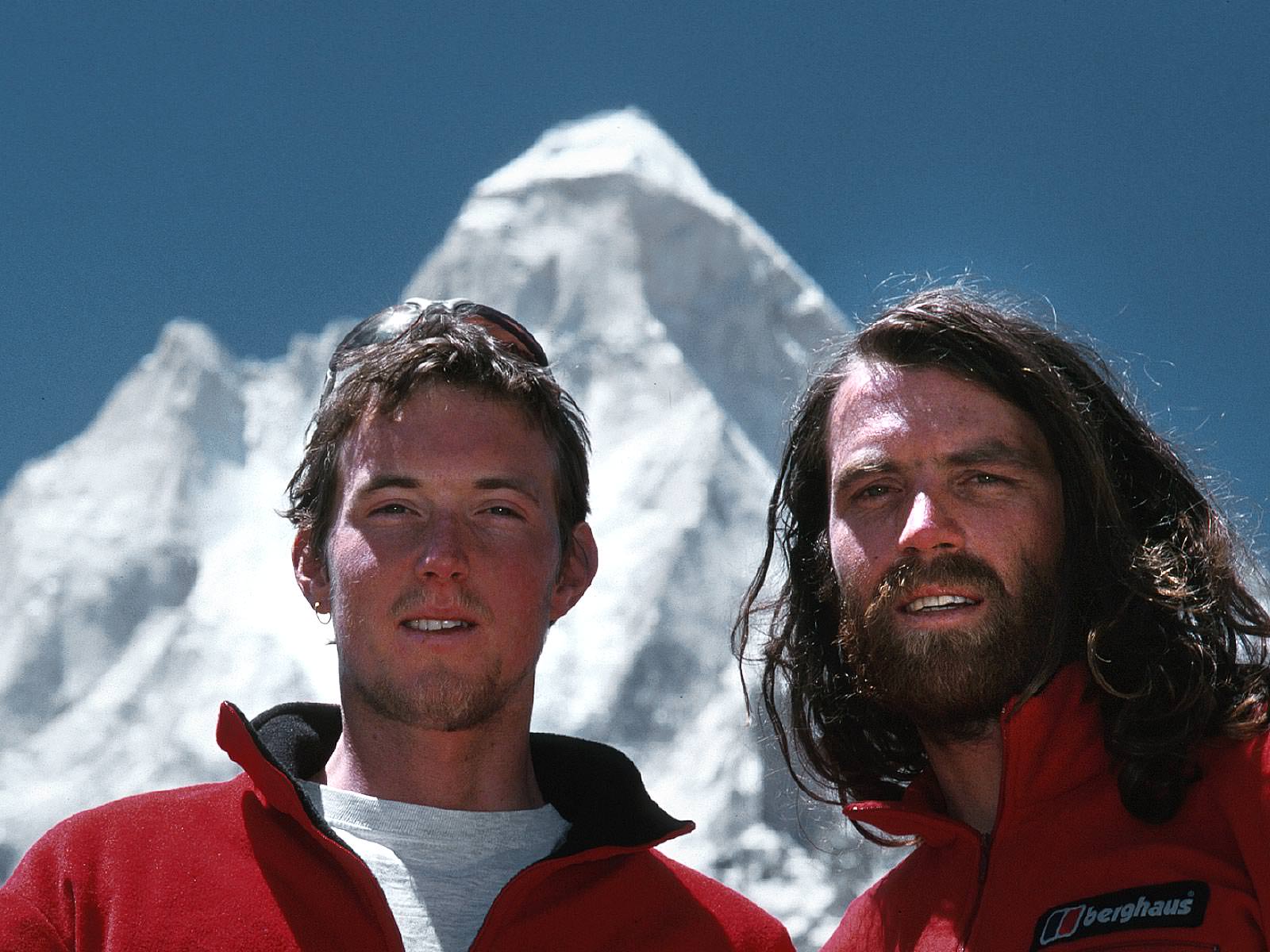 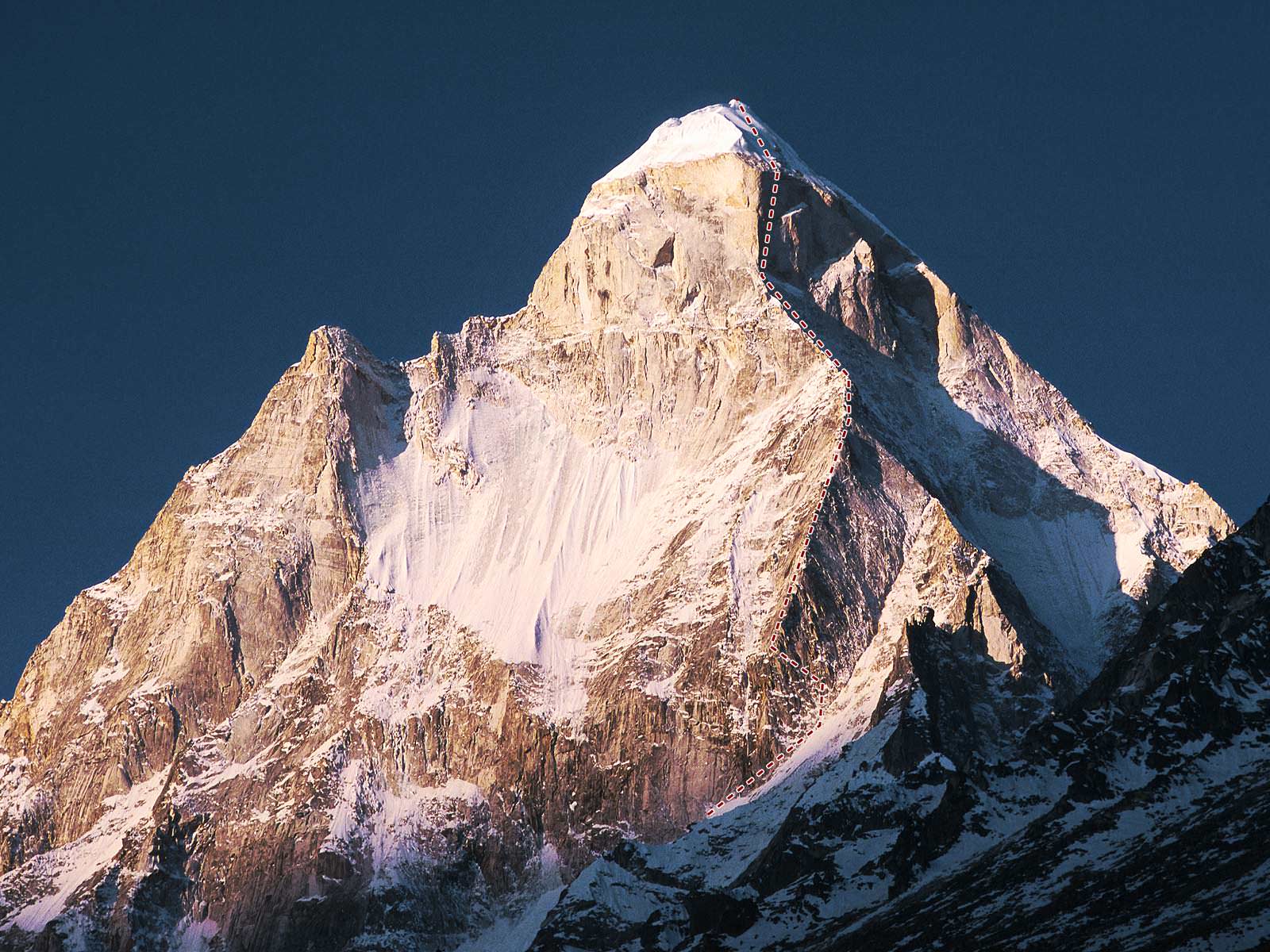 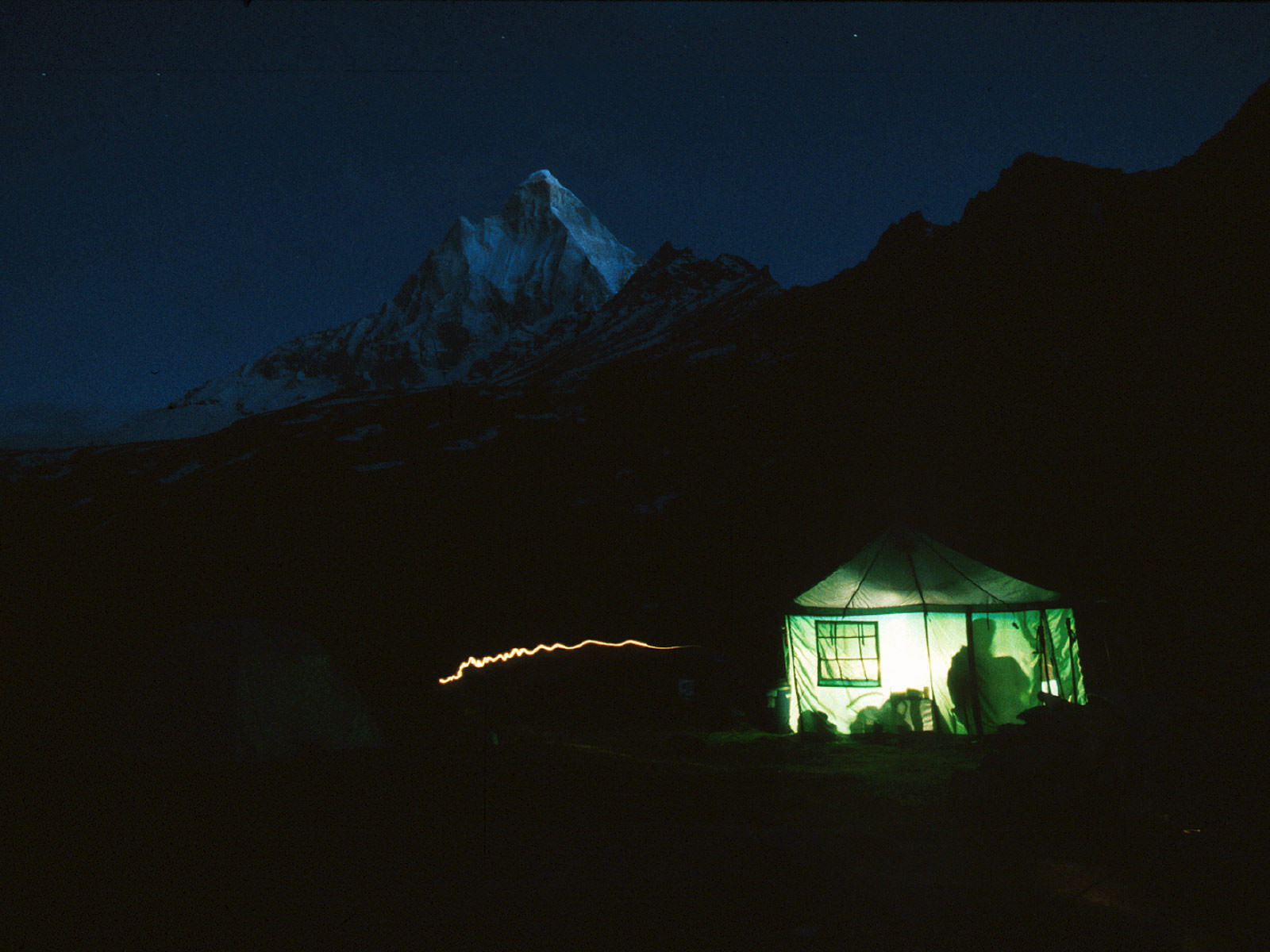 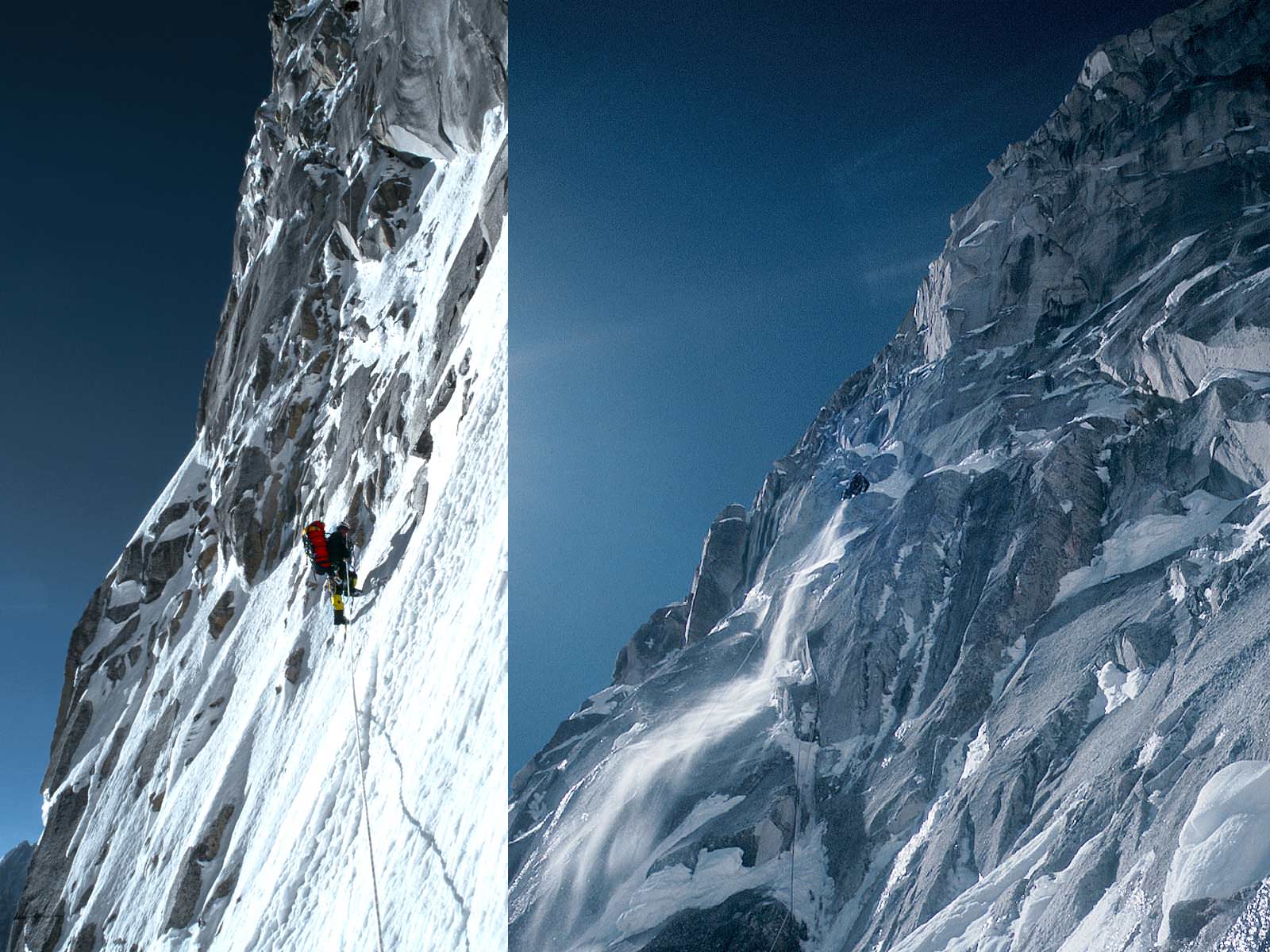 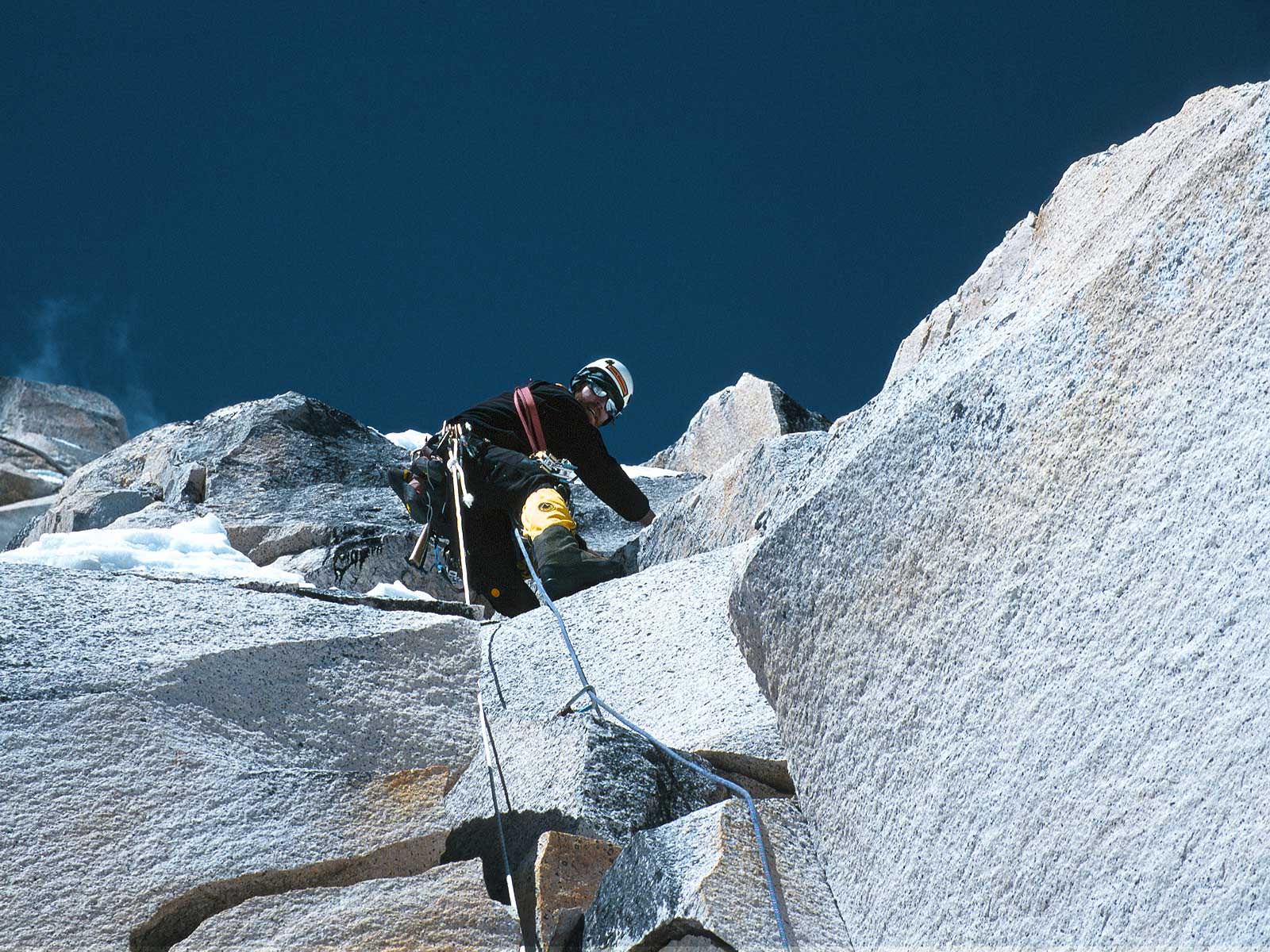 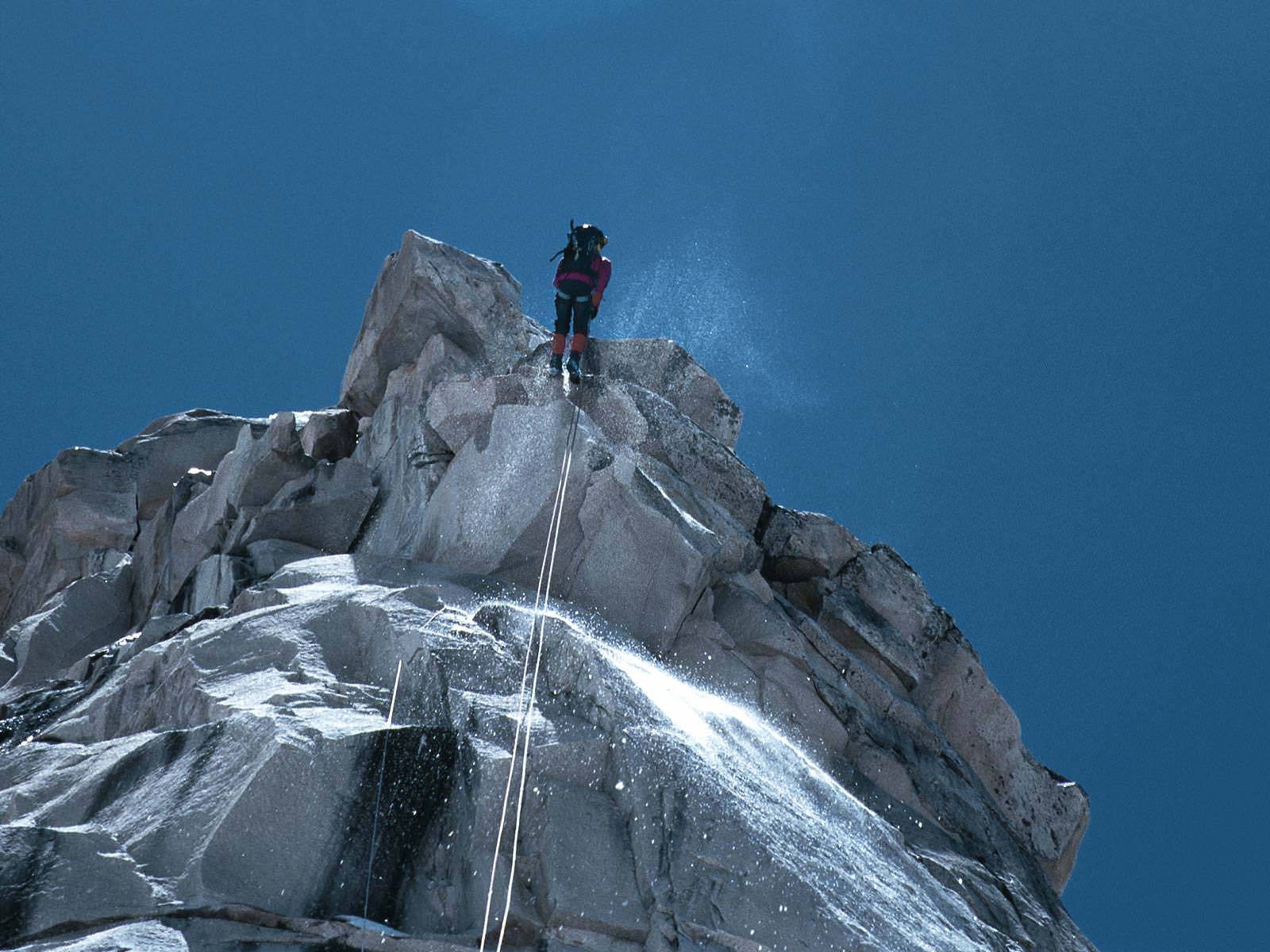 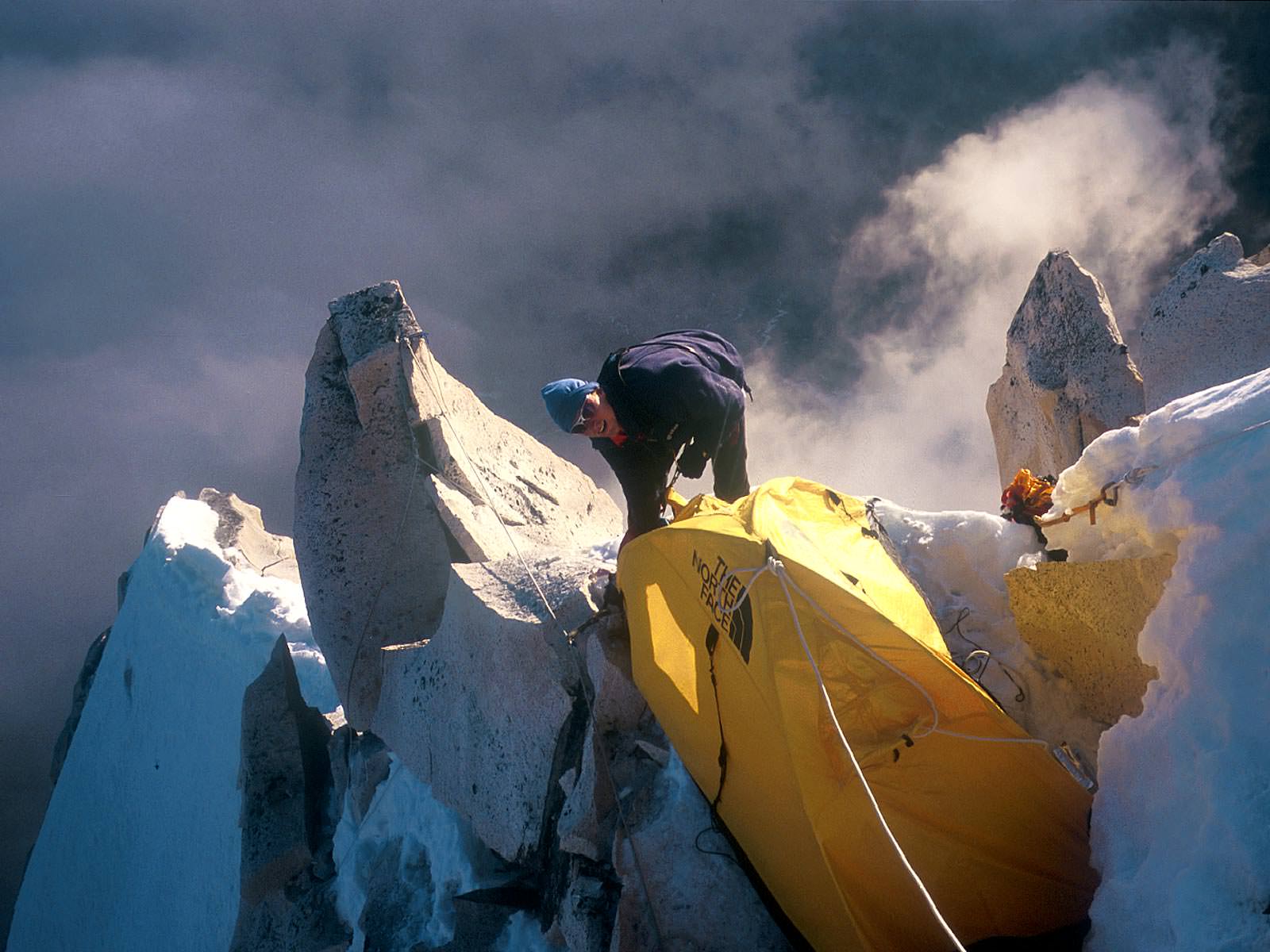 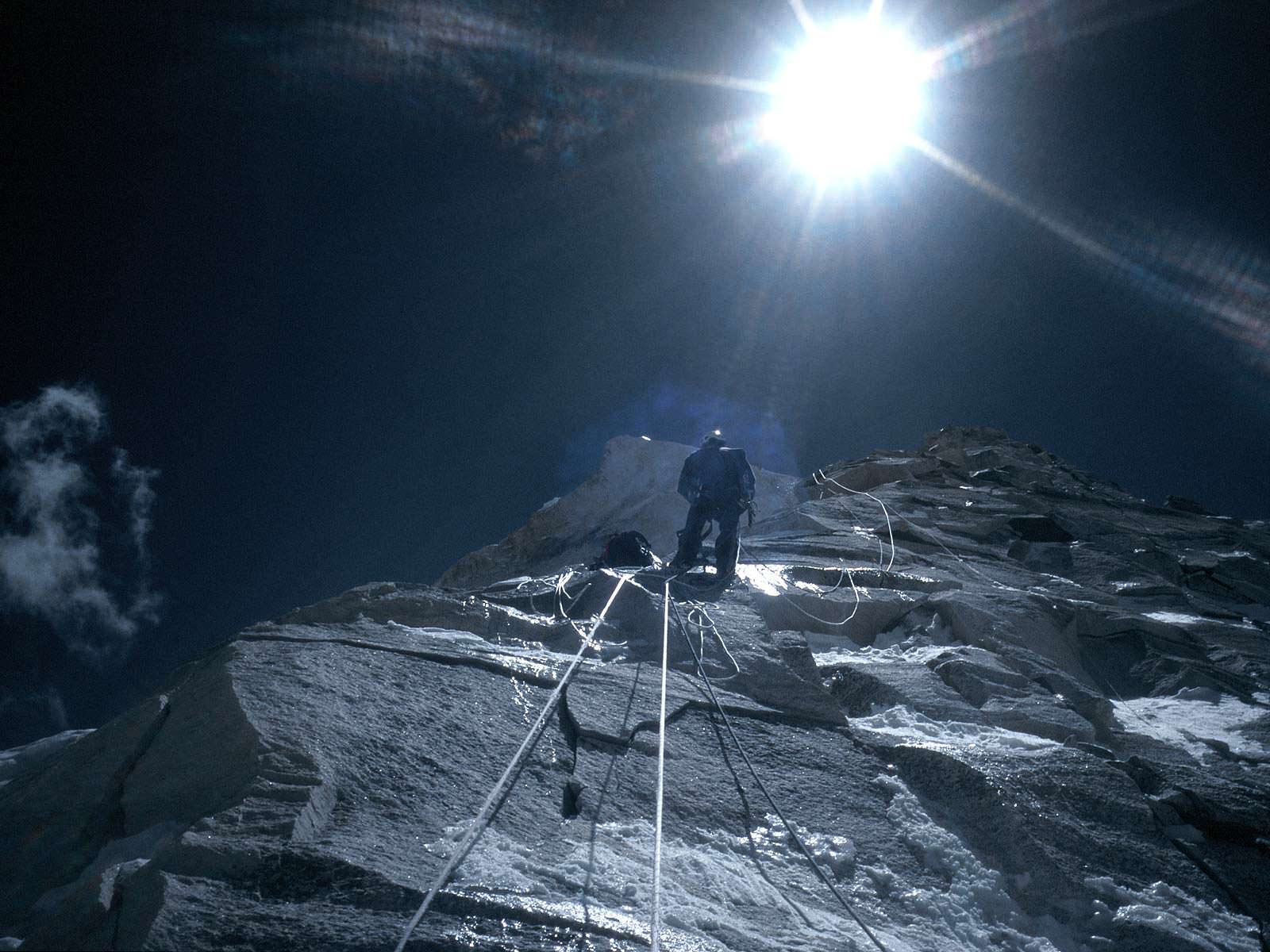 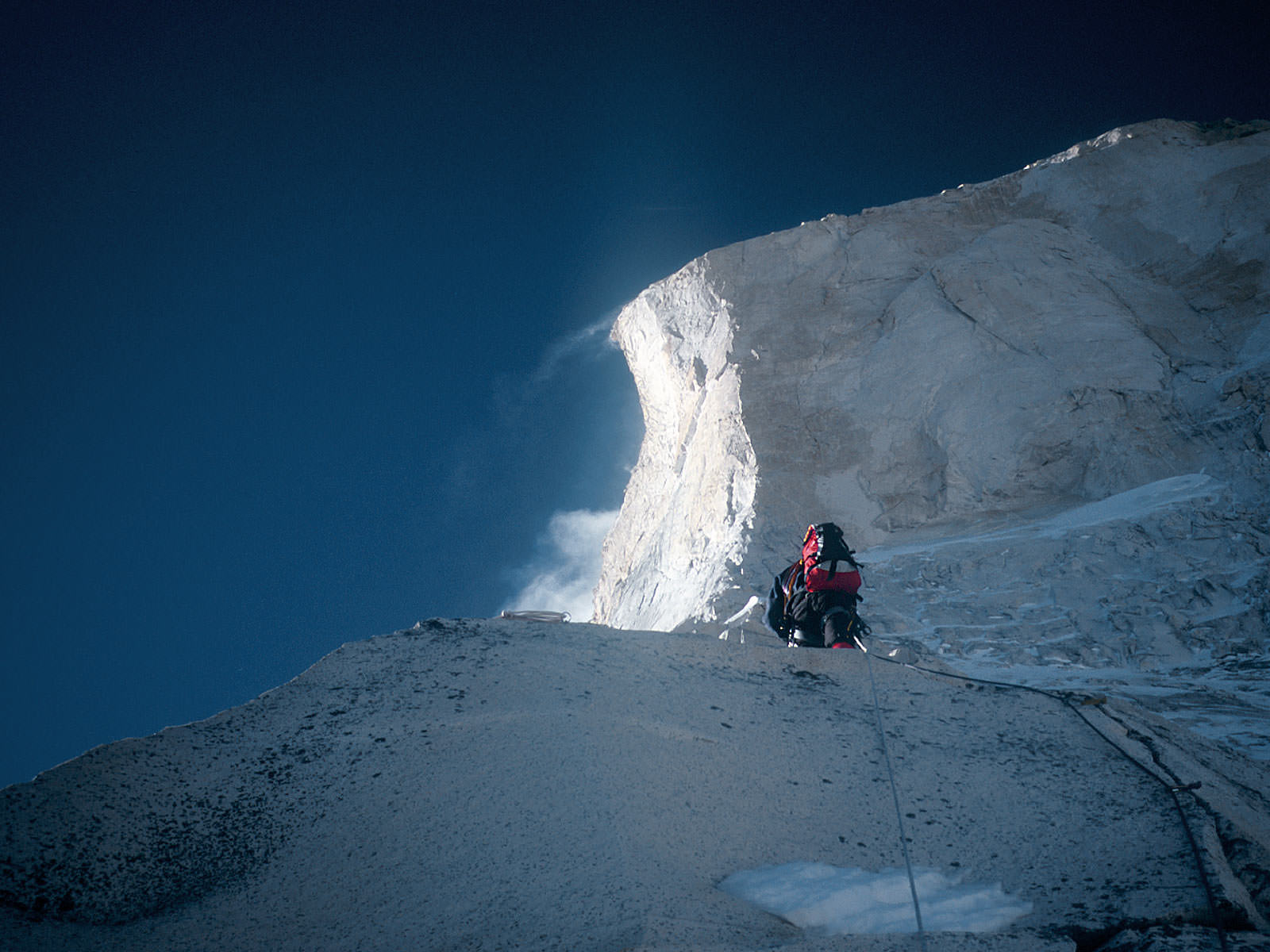 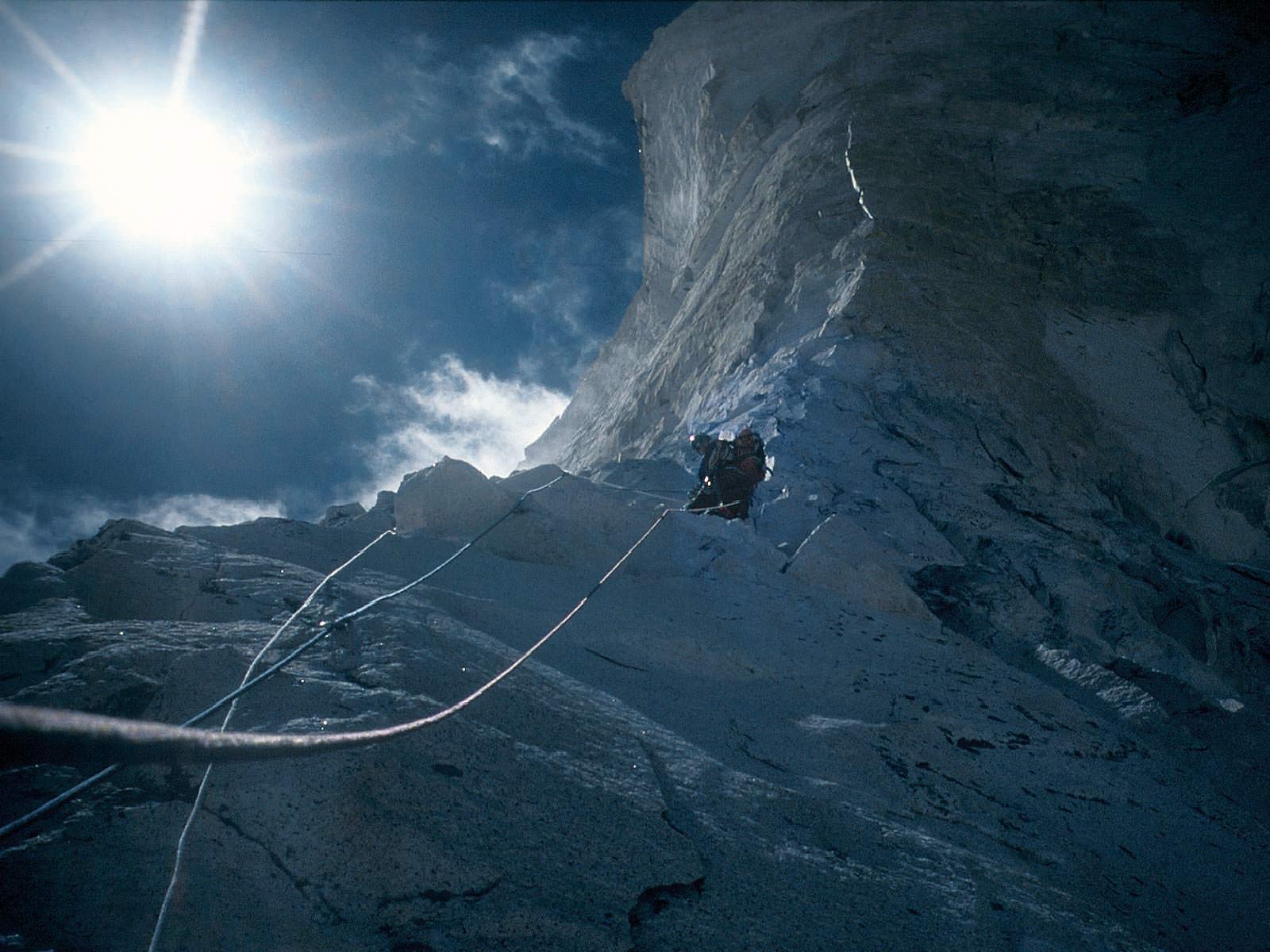 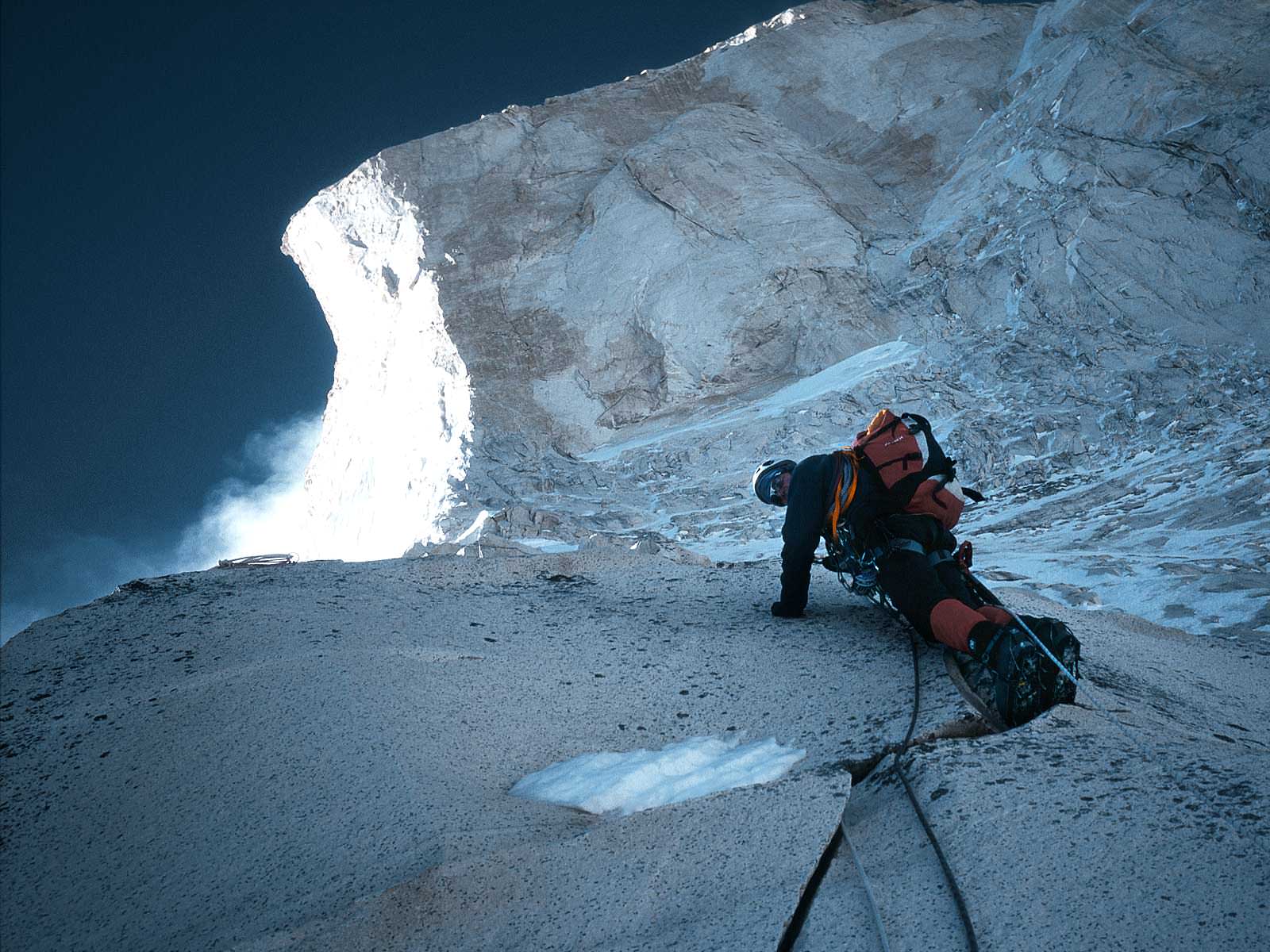 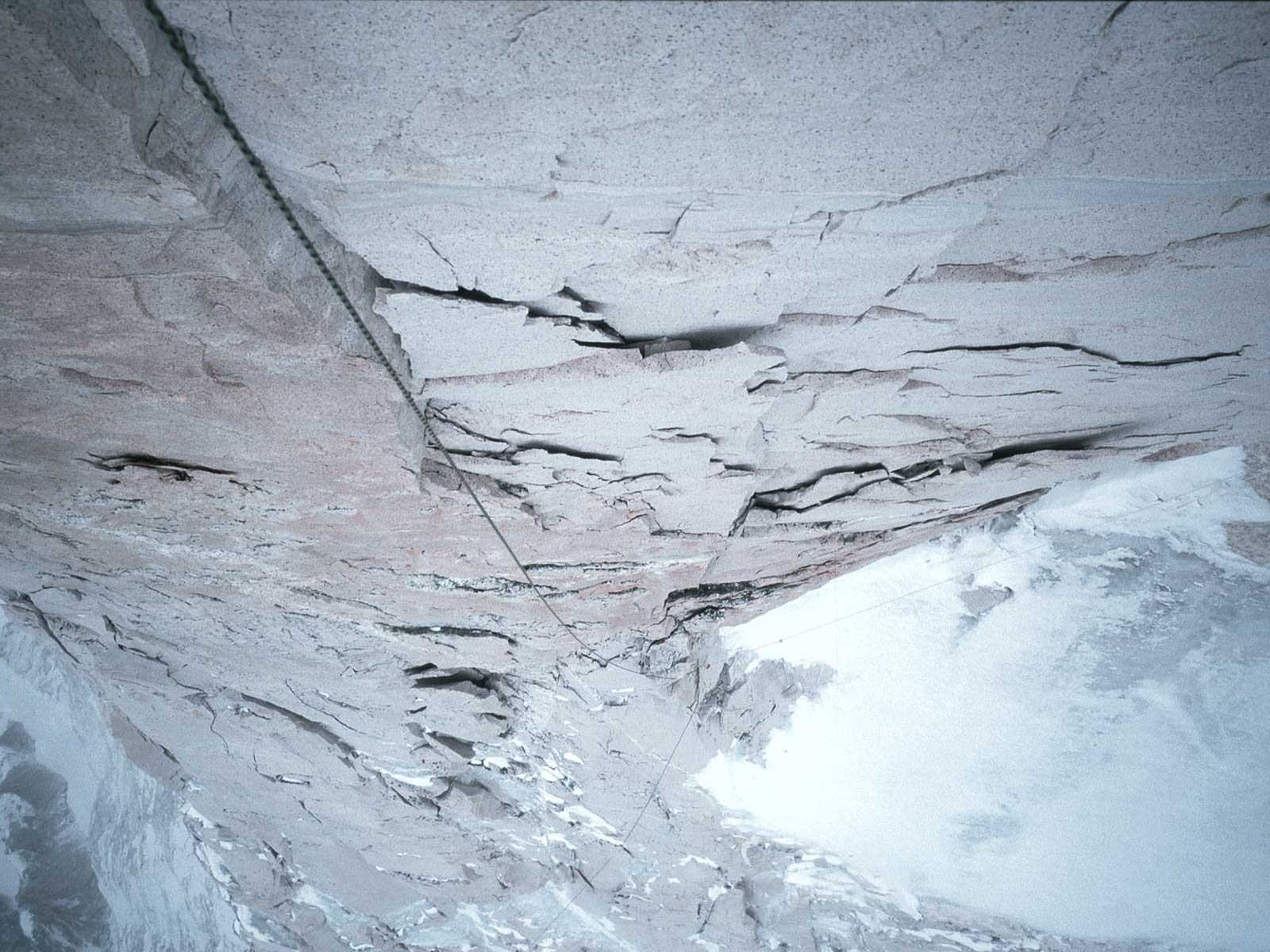 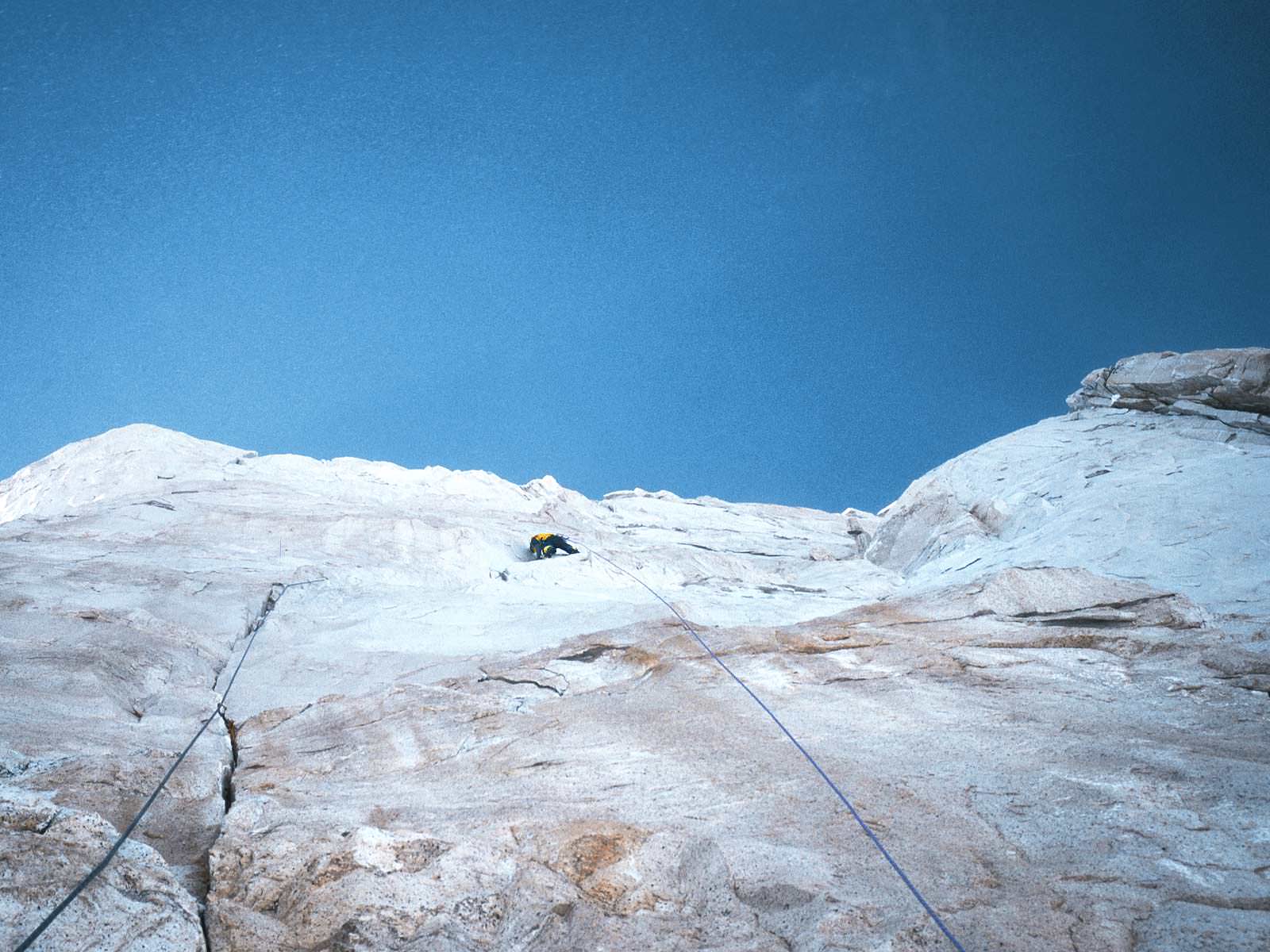 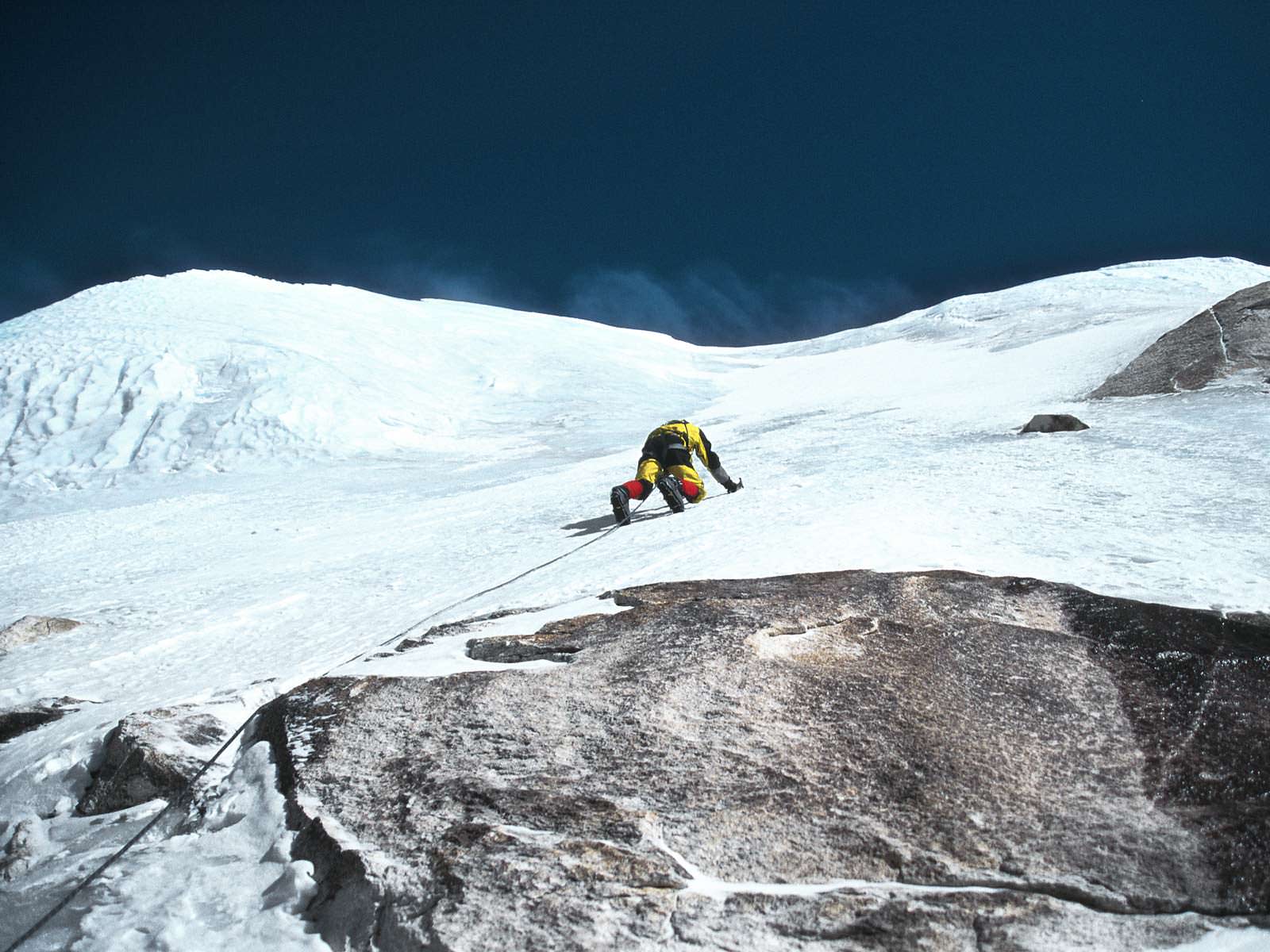 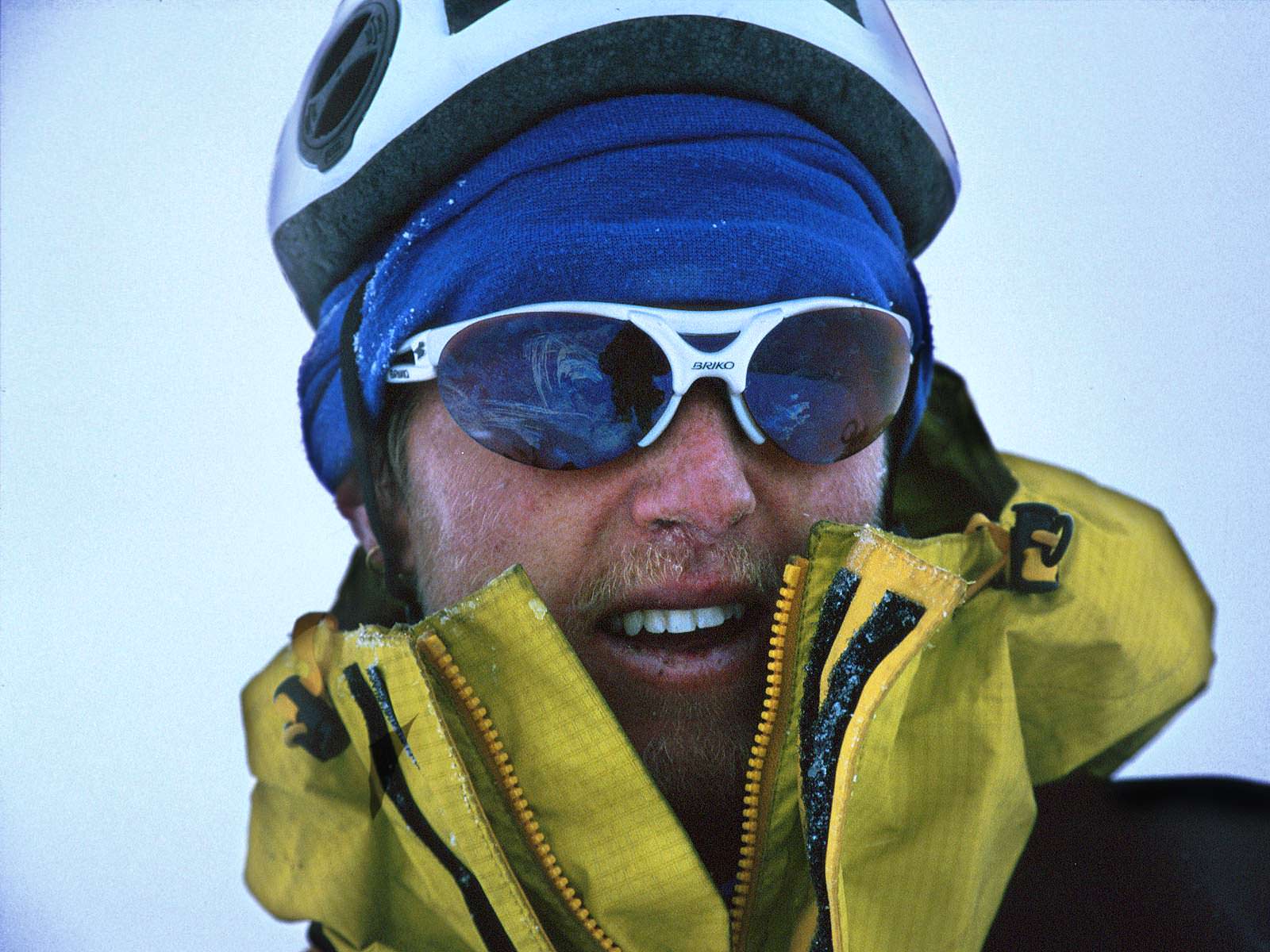 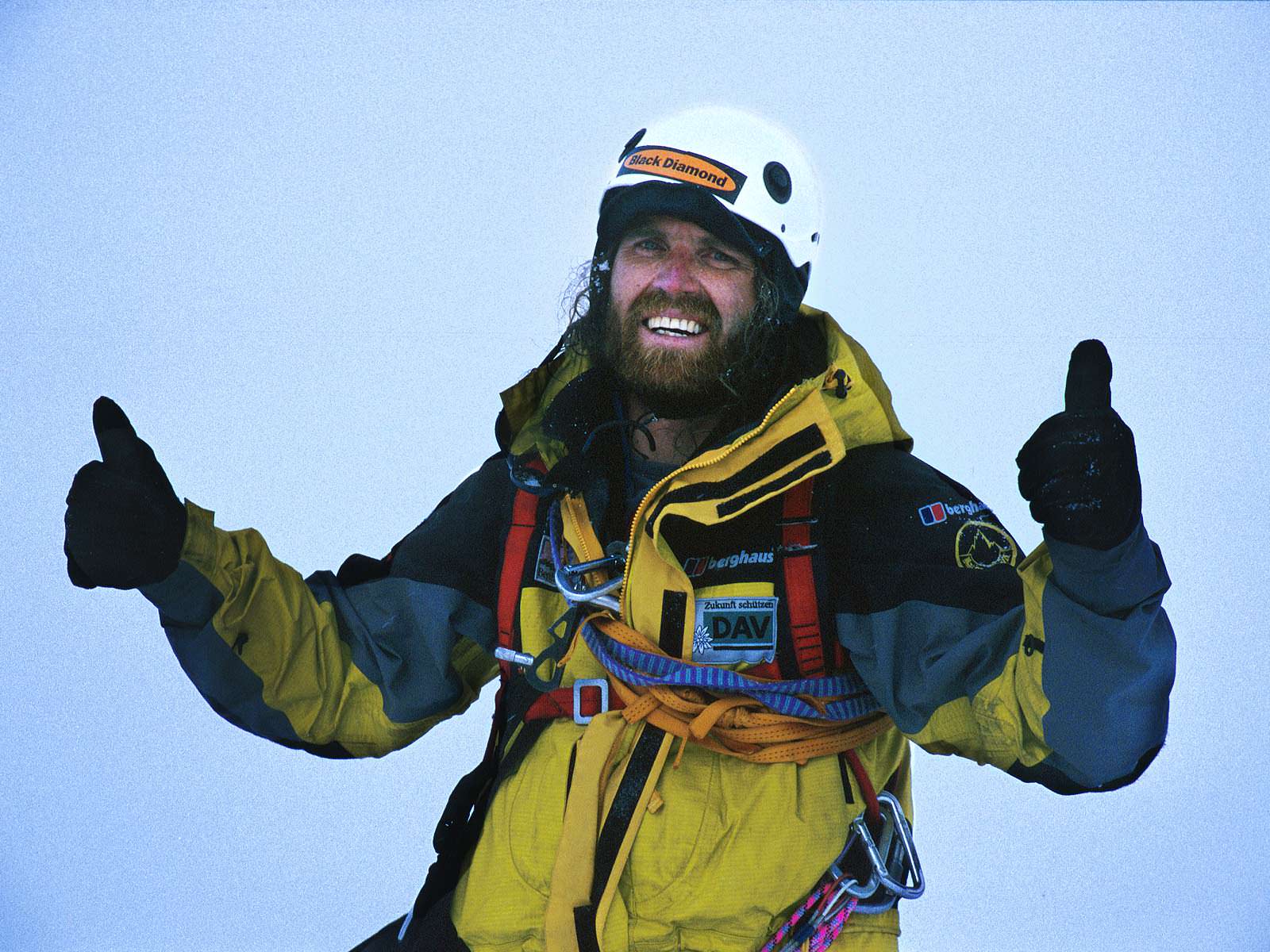 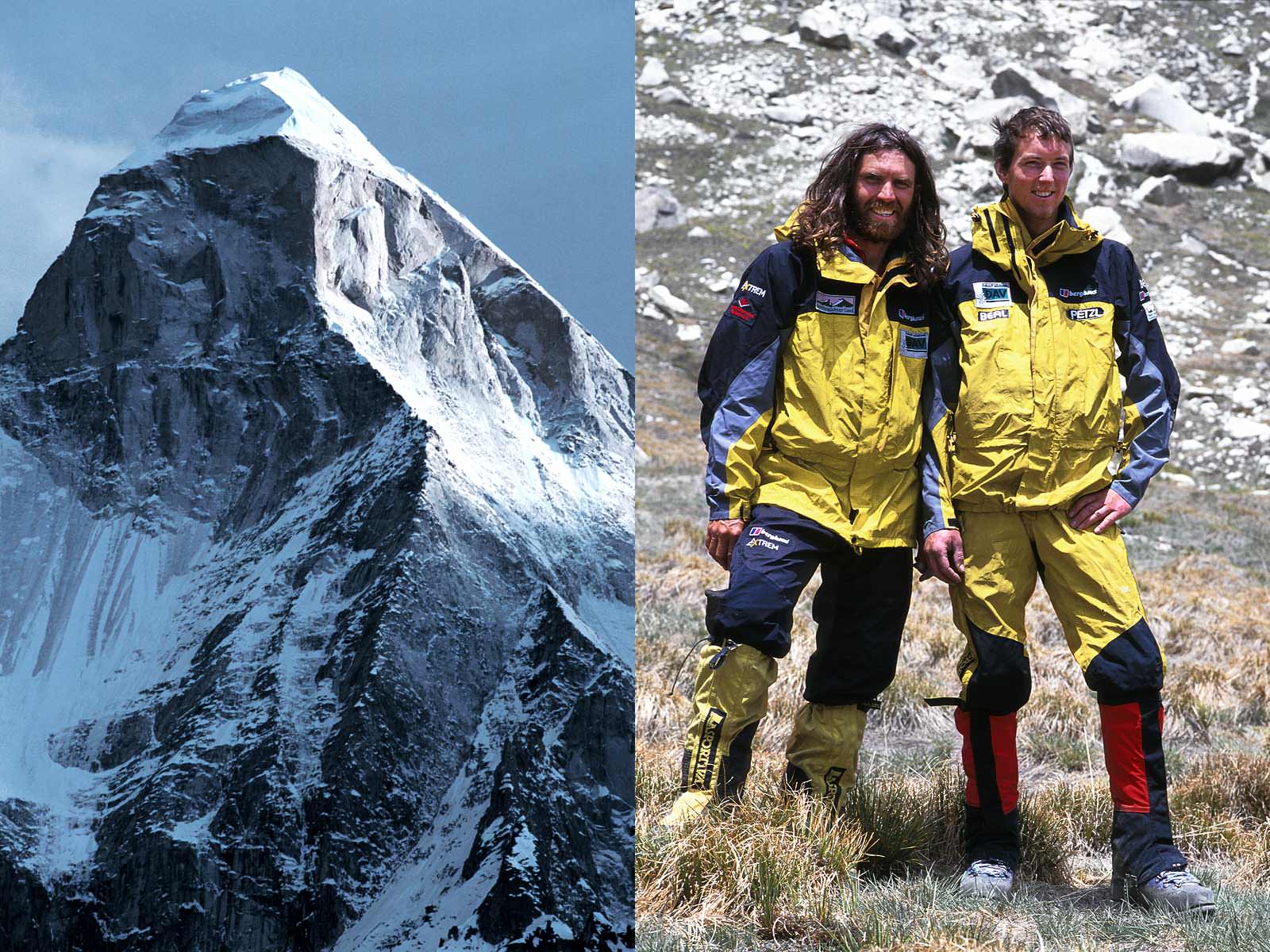 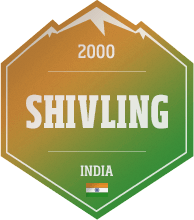 From April 25 to June 7 in 2000 we were at it again. This time we embarked on an expedition to the Garwhal Himalaya in India. Our objective was the beautifully shaped Shivling (6.543 m), the Himalayan version of the Matterhorn.

Alexander and I wanted to reach the summit via a new route along the Direct North Pillar. This magic line follows the Kammerlander-Hainz Route on the lower part of the wall, until it joins the Japanese Route at 6.050 meters. That route then avoids the 200 meters high, overhanging headwall by following a ramp system up and right. The new line continues straight up to the summit.

Bad weather, and the difficult conditions that come with it slowed our progress at the beginning. Then Alexander had to end the expedition due to sickness. I was lucky and found a new and ideal partner, the 28-year-old Swiss Iwan Wolf.

On May 29 we made our summit attempt and bivied on an exposed snow ridge at 6.050 meters. We spent another night there, and on May 31, after 12 hours of extremely hairy climbing, we finally stood on the summit of the Shivling at 6 in the evening. We named the route Shiva’s Line, and gave it a rating of 5.10+/A4.

Shivling is a mountain in the Gangotri Group of peaks in the western Garhwal Himalaya, near the snout of the Gangotri Glacier. It lies in the northern Indian state of Uttarakhand, 6 kilometres (4 mi) south of the Hindu holy site of Gaumukh (the source of the Bhagirathi River).

Its name refers to its status as a sacred symbol of the God - Lord Shiva's Shiva Linga. It was called »Matterhorn Peak« by early European visitors because of its similarity in appearance to that Alpine peak. While not of locally great elevation, it is a dramatic rock peak, and most visually striking peak seen from Gaumukh; that and the difficulty of the climb make it a famed prize for mountaineers.

After British exploration of the Gangotri Glacier in 1933, a German expedition led by R. Schwarzgruber climbed nearby peaks and did a reconnaissance of Shivling in 1938. They reported »no feasible route« on the mountain due to its steepness and the threat of falling séracs.

Shivling was first climbed on June 3, 1974 via the west ridge, by a team from the Indo-Tibetan Border Police, led by Hukam Singh. The ridge is the lowest-angle feature on the mountain, but still involves serious mixed climbing, and is threatened by the sérac barrier noted by the Germans. The ridge leads to the col between the two summits; a steep snow/ice ridge then leads to the main summit.

In the 1980es, the South Pillar and the South Ridge, as well as the North Face were climbed. German Thomas Huber and Iwan Wolf from Switzerland climbed the Direct North Pillar in 2000, an ascent for which they received the Piolet d’Or, the most important award in Alpinism.

In May 2012 Walerij Rosow made the first BASE jump from the summit.

Since the first ascent, at least ten other routes have been climbed on the peak, ascending all major ridges and most major faces of the mountain. All routes are extremely serious undertakings.