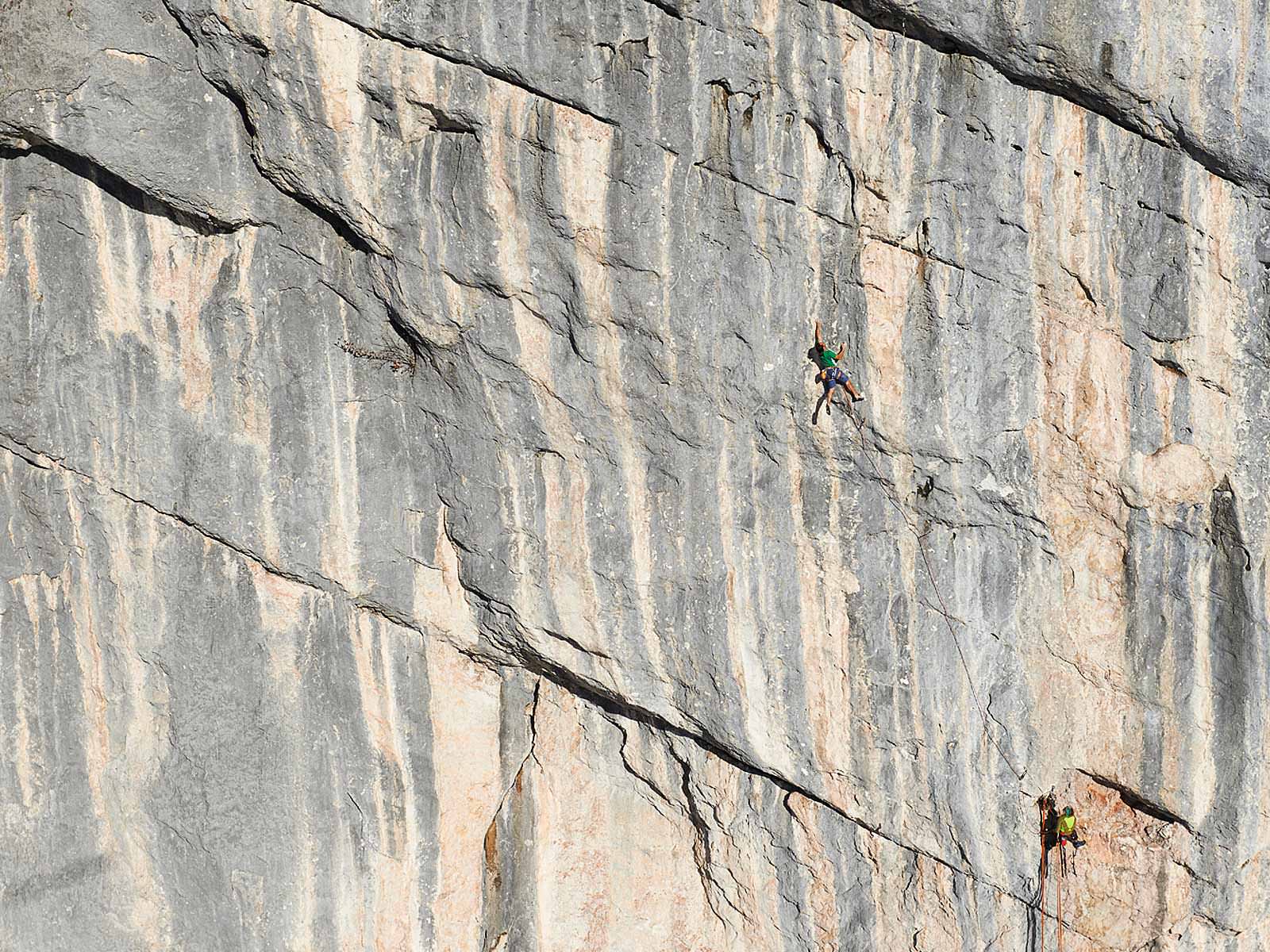 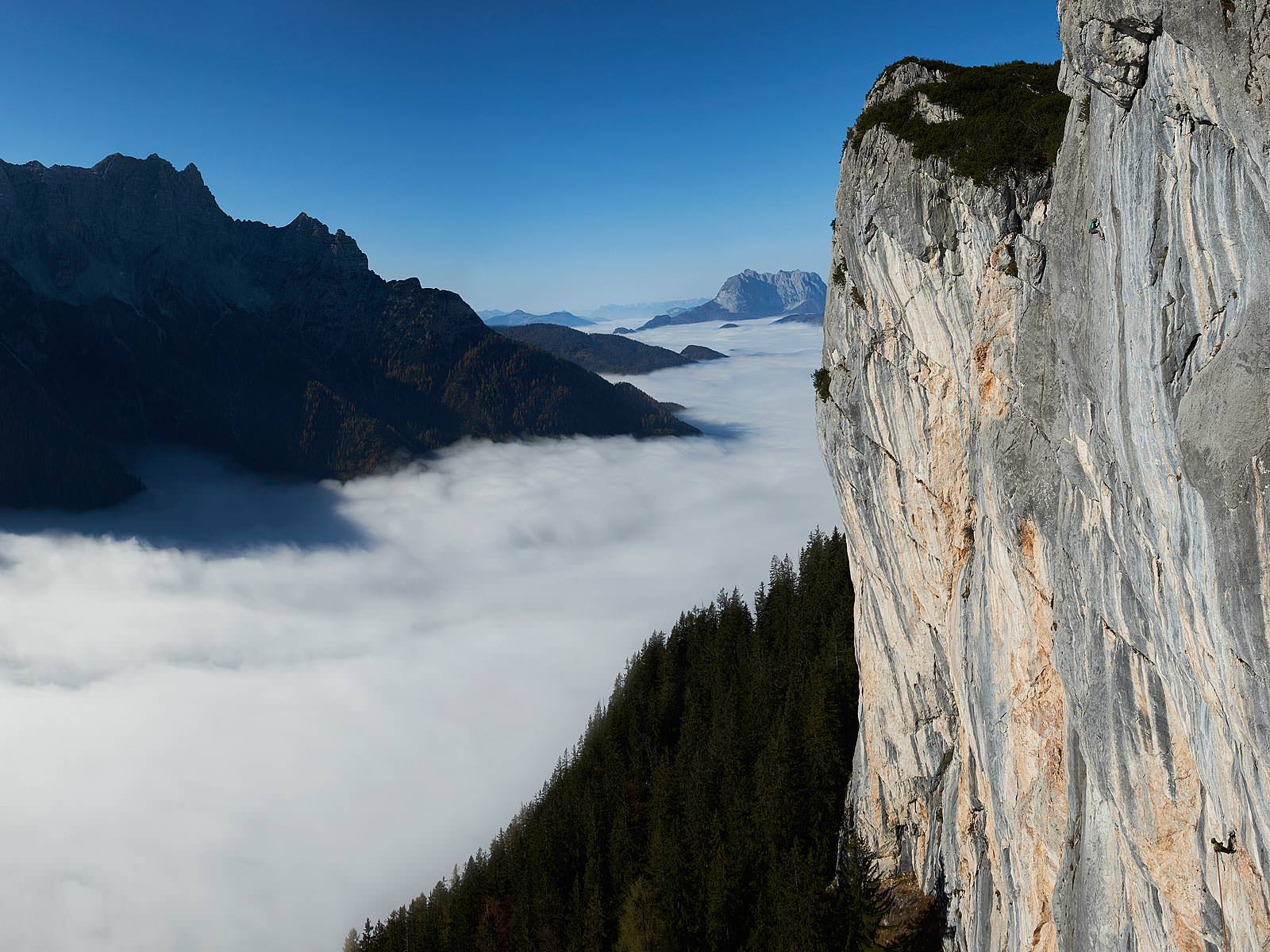 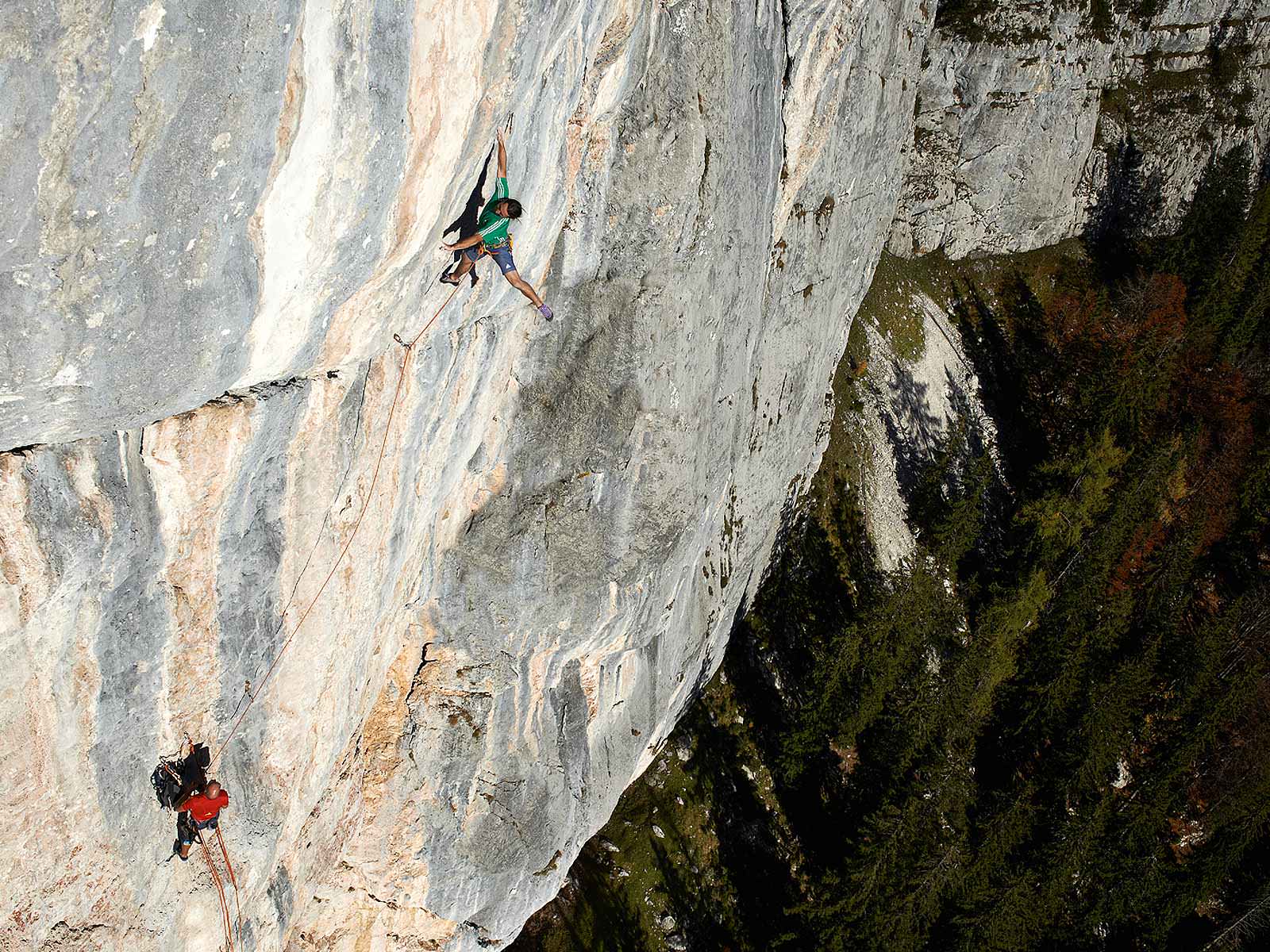 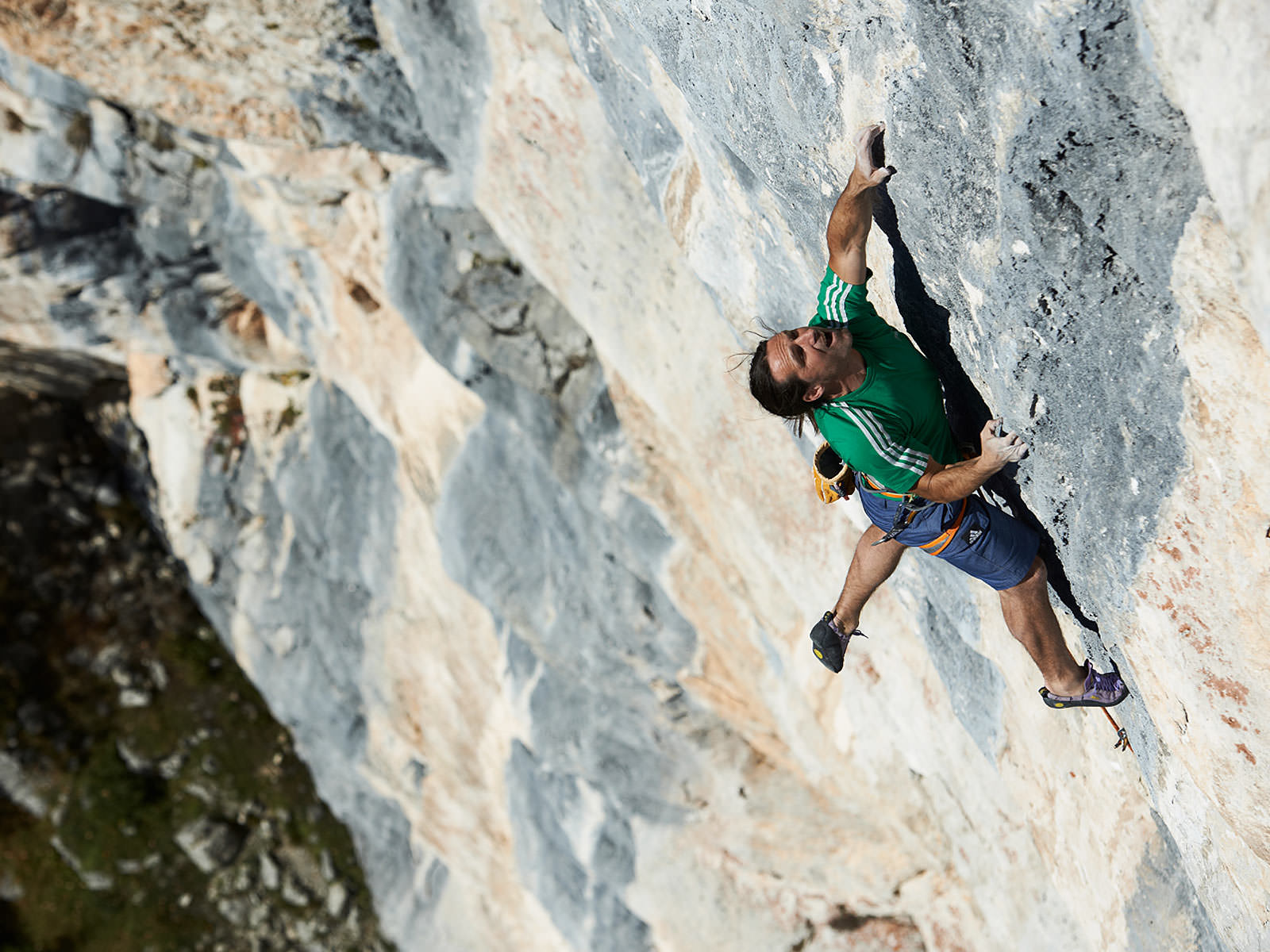 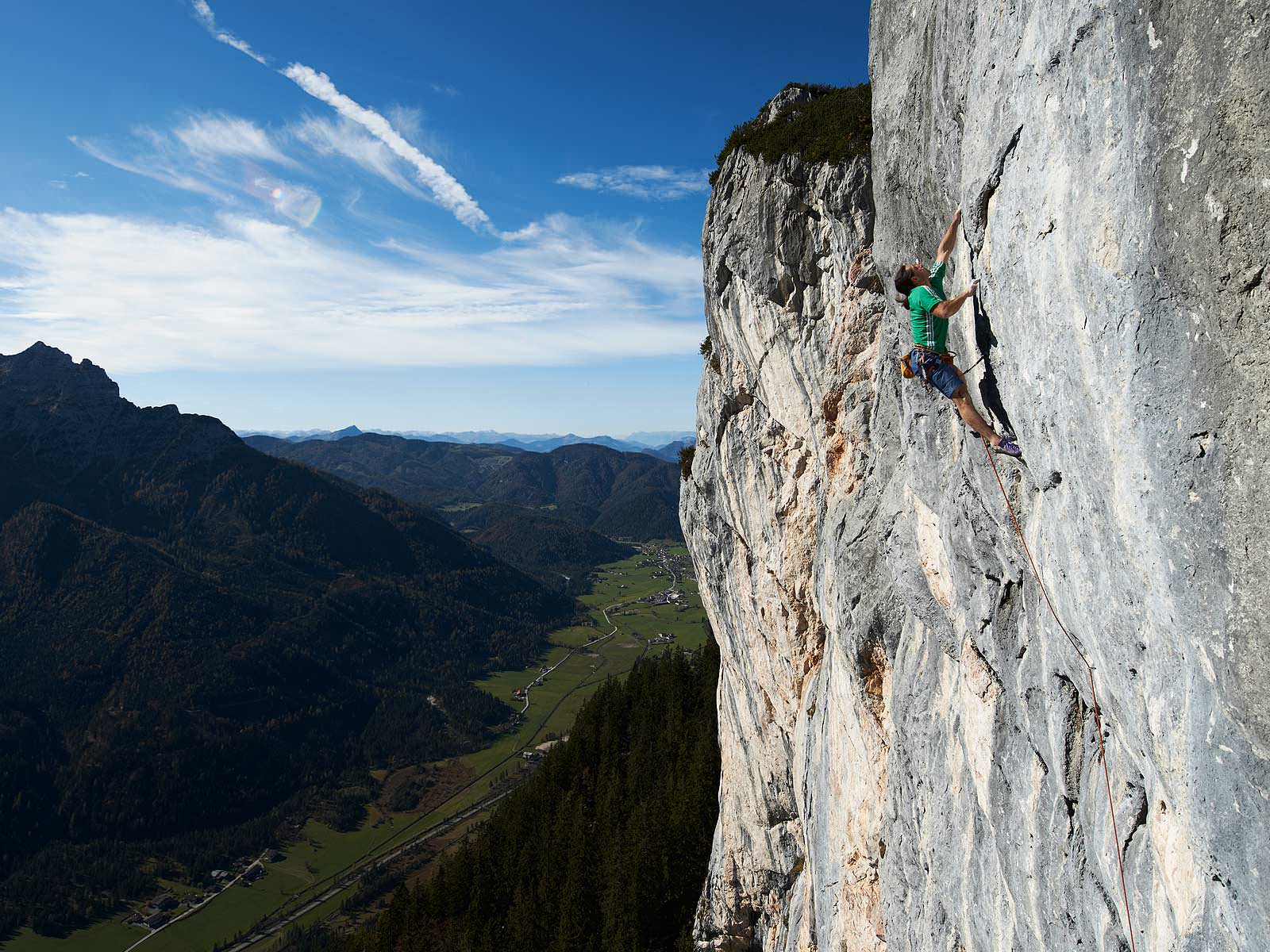 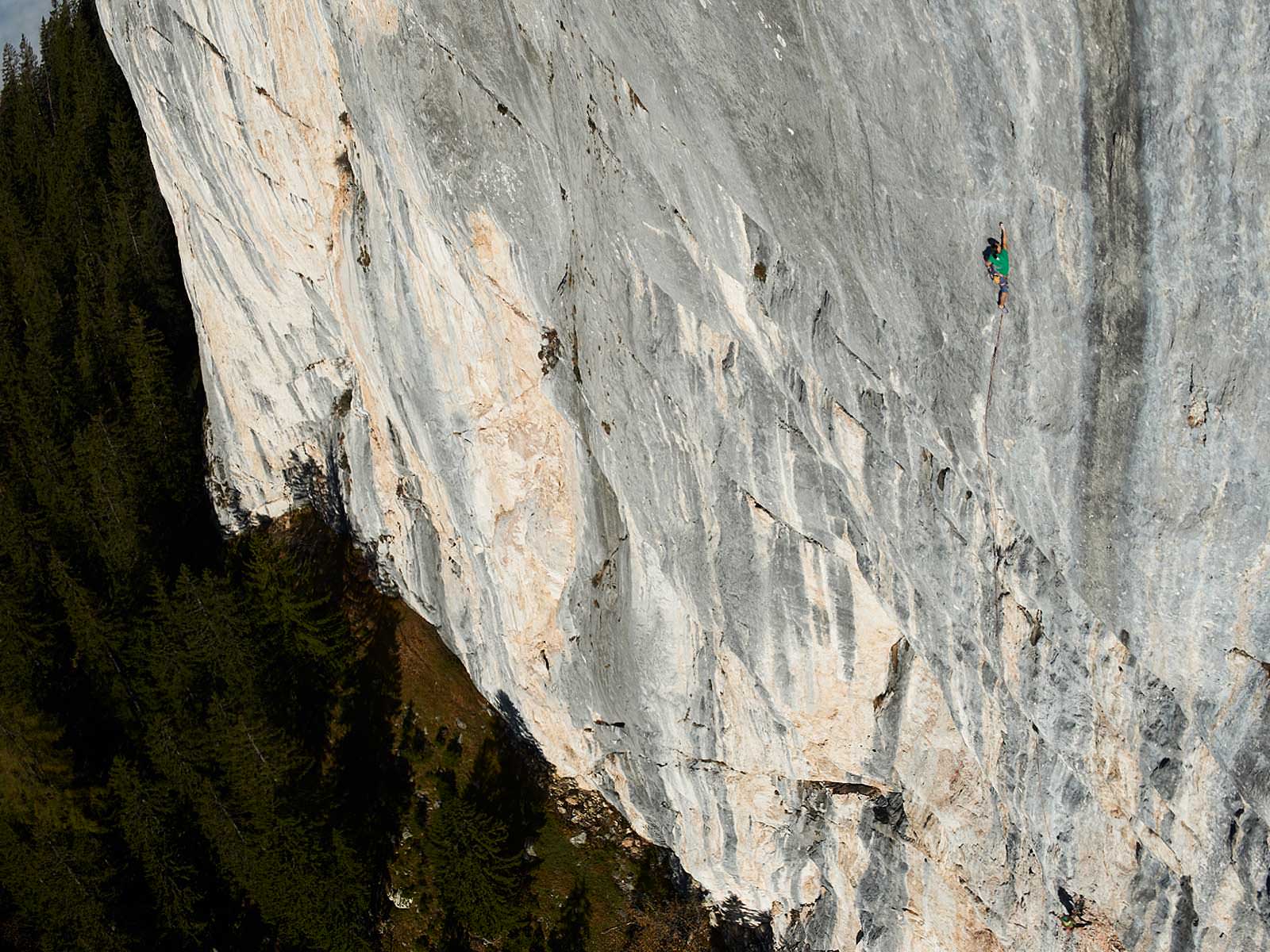 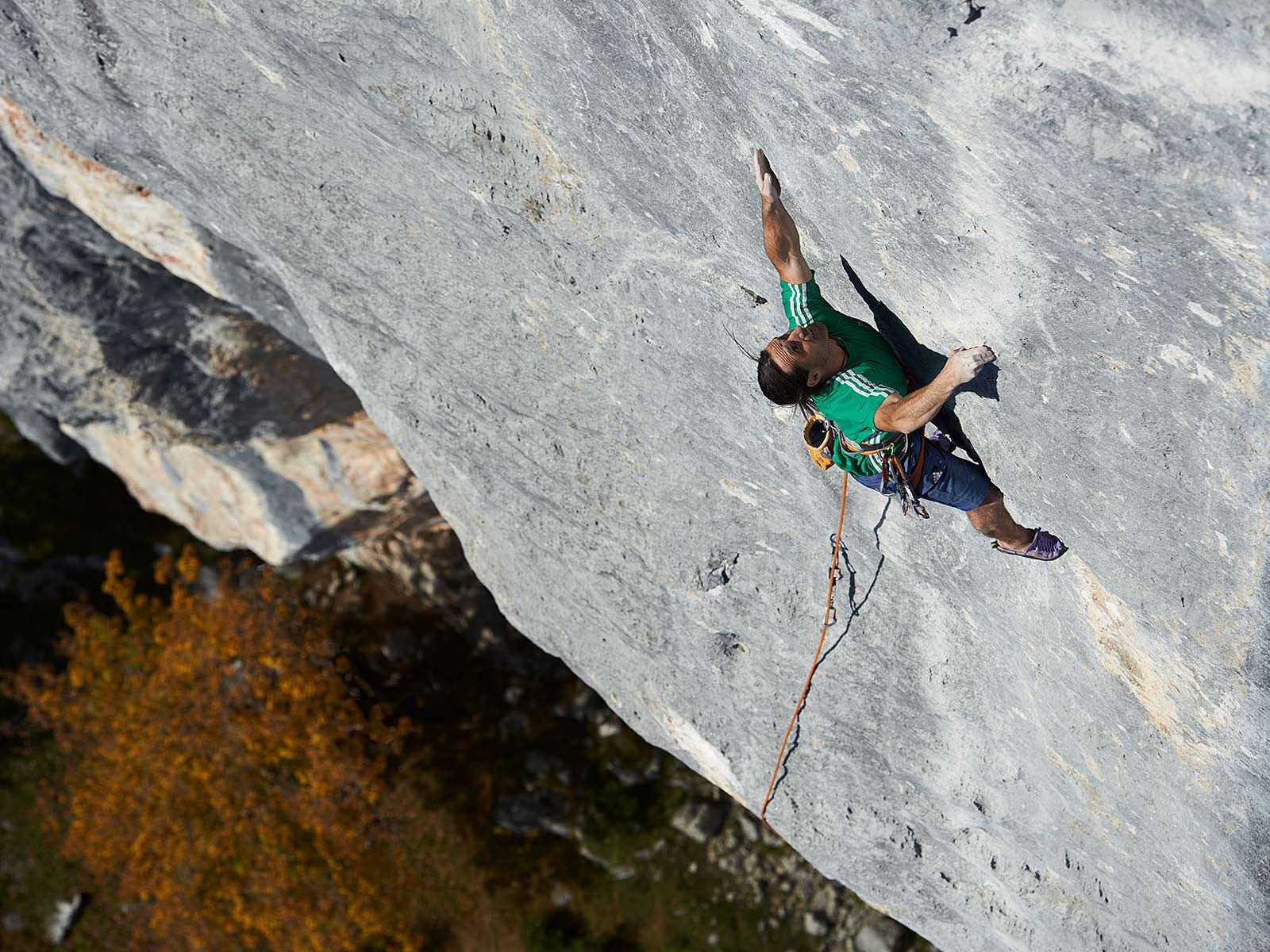 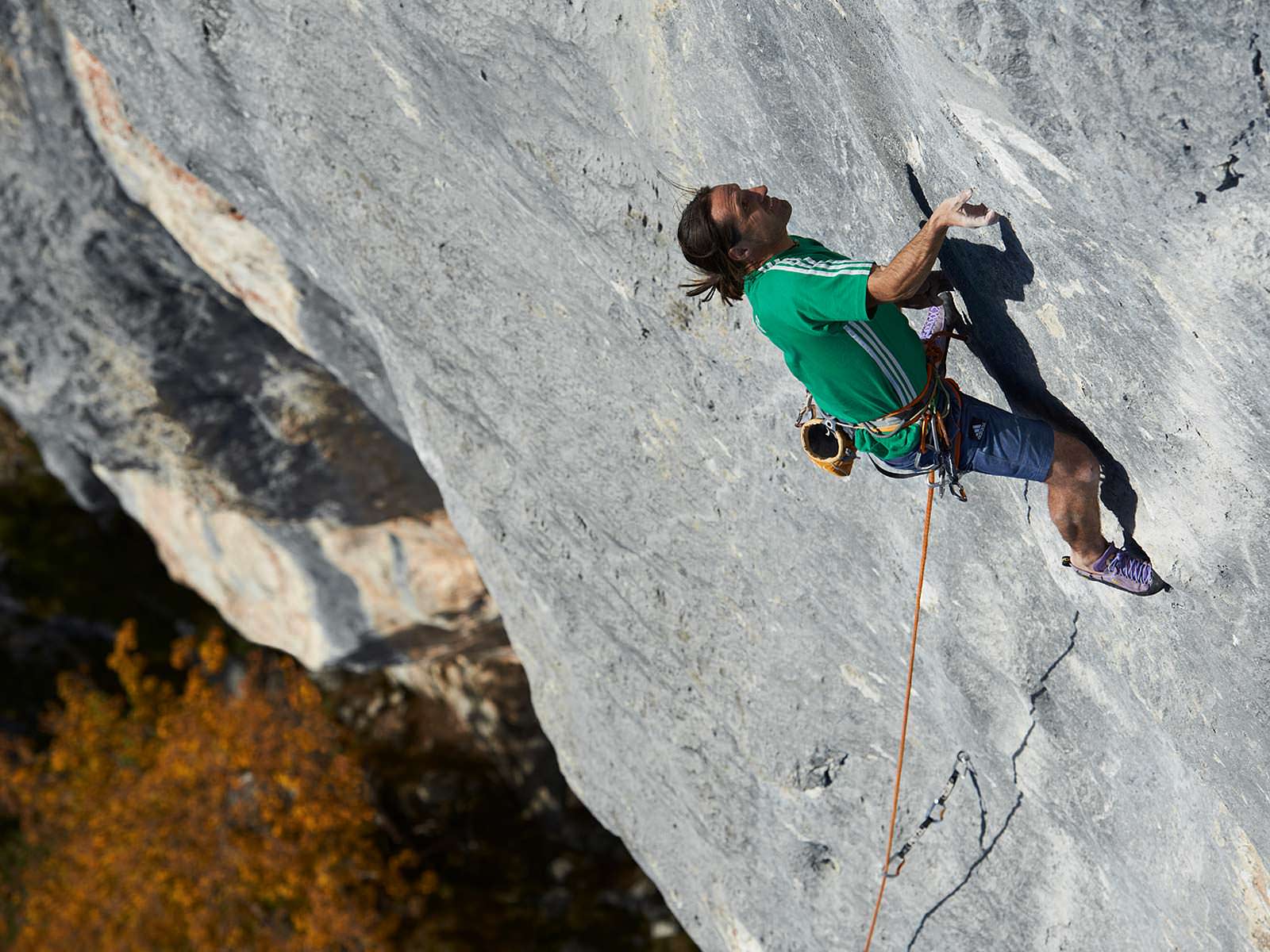 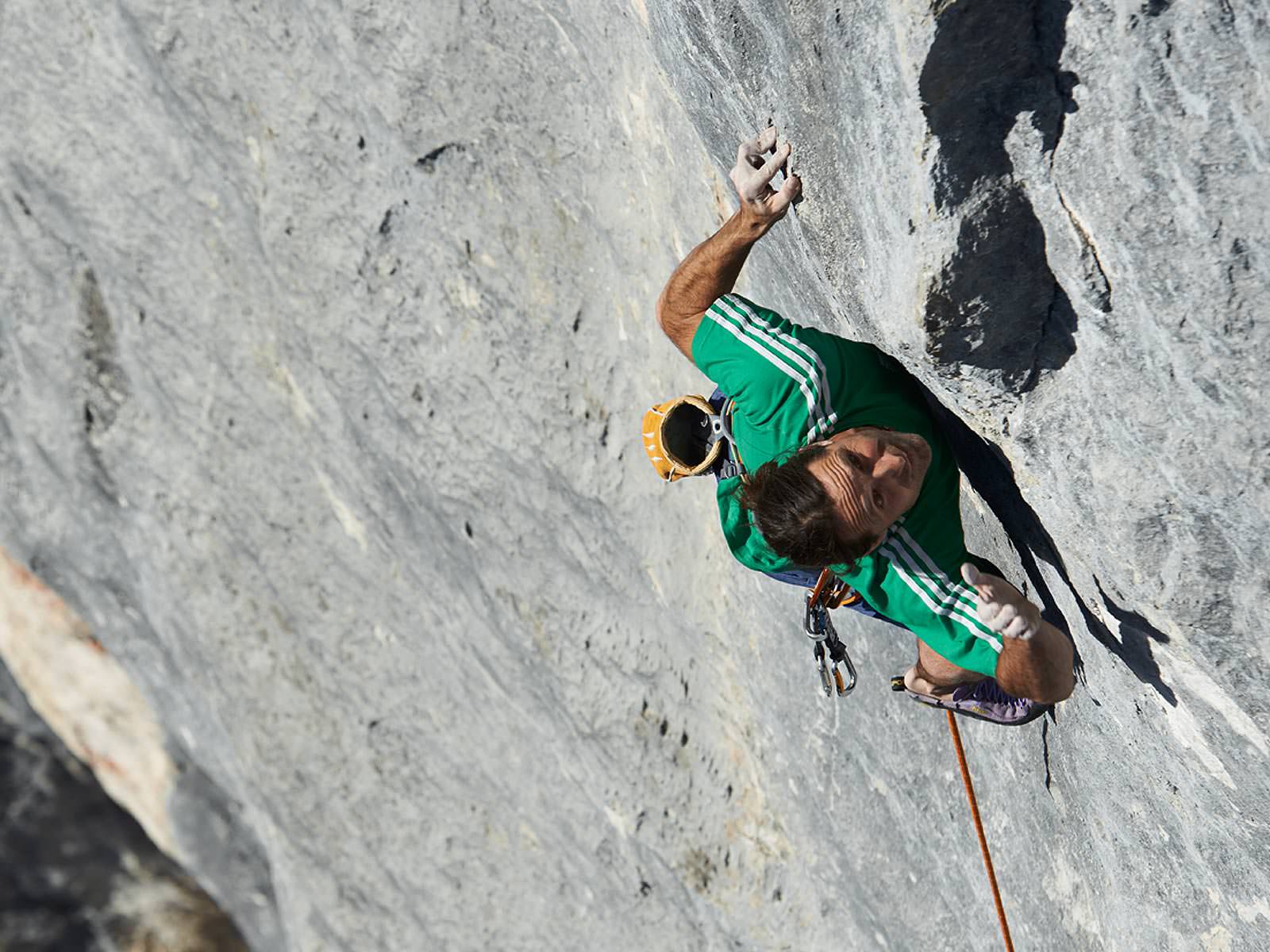 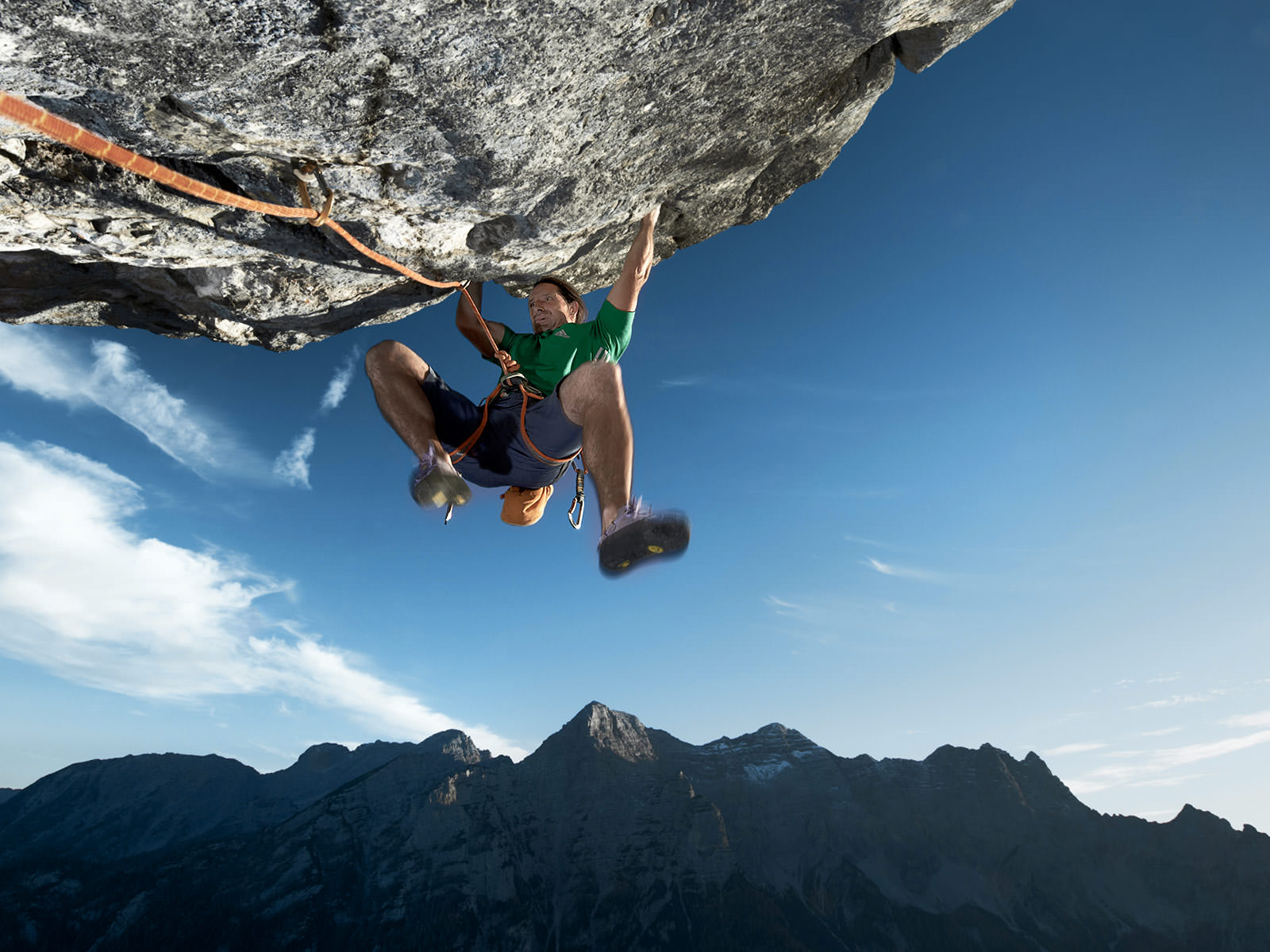 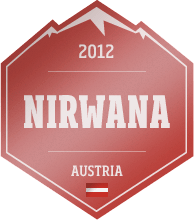 Finally there - what began with Sansara got me to »Nirwana« in the end.

Three years ago, Guido Unterwurzacher and I had found a steep seven-pitch-climb through this overhanging limestone cliff on this same part of the Sonnwendwand. Donnervogel, an extraordinarily physical multi-pitch climb, is simply fantastic.

It’s happened again. A first ascent! Things are always a bit different with first ascents. The question always is, what do I want? I wanted something new, a next step after what I’d started with Sansara. A first ascent in extremely difficult terrain, solo.

Thomas and I focused on a project in Baffin Island that summer. Hard free climbing on an Arctic big wall. Climbing hard is required, and the best training is exactly that! I get going, considering that no route has ever been done by endlessly pondering.

For the first four pitches, I follow the Donnervogel. At 5.12c, this is not really difficult, a good warm up. I have to get used to the Soloist again though. Fix the rope at the anchor, put it into the soloist, and use the thing efficiently to climb well in difficult terrain. It’s alright to fall, but I have to admit that the mental block is huge. At least until it happens, and I fall for the first time. I know that the soloist works, and yet there is an eerie feeling because no one is belaying you.

That first day, I manage no more that 15 meters of new terrain. An extremely long dyno puts me to test. A meter and a half  of blank lies between small crimps and the next hold, which is also not exactly a jug. My feet are just barely above the bolt, but I have to pull the rope through in advance before I can go for it. I accelerate, every part of me gives 100 percent, I fly, my fingers grab the hold. They grab it as hard as they can. To no avail. Down I go. While I fall, I get turned around, the dynamic brake at the anchor gives some slack and after ten meters I come to a halt. That was a bit more than I expected. Or rather quite a lot more than I expected.

I wanted to commit to this game. Run-outs and hard moves, if possible, far above the last protection, that is the kind of spice I came for. I want to outdo myself, without biting the dust though.
The three days during which I fought hard for this first ascent were a real adventurous journey in the midst of today’s civilised Europe. Heading into virgin terrain alone. In the heart of Europe, an yet far away. Archaic and wild.

Especially because my “Nirwana” was at my limit in term of the difficulties. What I originally thought would be perfect training for the expedition to Baffin Island turned out to be the my most interesting climbing project in years. The best of its kind that I’ve ever climbed. It was great gift, because it’s not easy to find a line of such difficulty on an alpine wall!

Accordingly, getting the redpoint ascent wasn’t going to be a quick mission! After a couple sessions to figure out the moves I go a for a first attempt, which makes it blatantly clear that my Nirwana is not easily attained. I certainly won’t redpoint the line before departing on the expedition to Baffin. There is either excessive heat or torrential rains - the weather in early summer 2012 was completely crap.

It’s got to happen in Fall. It’s tough to stay at it after 7 weeks in the Arctic. No vacation and relaxation, instead I attack again right away and try to not let go. Michi Althammer gives valuable support and helps me stay psyched.

In the end it takes no less than 22 days of living in »Nirwana« until I finally attain it with my redpoint ascent of Nirwana in September. Michi was along that time as well and in a way I was almost surprised how much fun this useless holding on to the rock can be. Climbing is awesome.