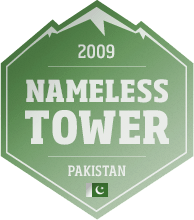 Every expedition to Pakistan promises raw adventure. Like many times before, the journey took us to the Karakoram Mountains, from Islamabad over Skardu to the Braldu Valley. From Askole we continued along the Baltoro Glacier to the Nameless Tower.

This granite spire is part of the Trango Group and spots one of the most beautiful rock climbs in the world, the Eternal Flame. Exactly 20 years ago, Kurt Albert, Wolfgang Güllich, Milan Sykora and Christoph Stiegler did the first ascent of the true gem of these wild mountains. Back then, they freed about 80% of the route. There were only a few pitches on which they had to resort to aid. Splitter cracks reminiscent of Yosemite Valley, perfect orange granite, up to 5.12- in standard. A climber’s dream.

Back then, the idea of “conquering” summits was firmly established in the minds of mountaineers. Most efforts focused on new routes up virgin walls. It didn’t matter what it would take to reach the summit - “aid or free?” was of no concern, the “how” didn’t matter.

This climb is situated at an altitude of 6.000m and is nowadays hailed as a milestone in alpinism, because what mattered for Güllich and Albert was precisely the “how”. They wanted to take the free climbing idea from their home turf Frankenjura to the Greater Ranges. The names Güllich and Albert, the photos of the first ascensionists, and the reports of those who repeated the route were the reasons why Eternal Flame is now one of the most famous alpine rock routes in the world.

In 2003, Denis Burdet managed to free two of the four aid pitches, with difficulties up to 5.13a. The tenth pitch, a 15 meter bolt ladder across a blank face and the pendulum on the second pitch with 4 meters of featureless granite remained unsolved riddles.

In 2005, another hurdle was taken by Iker Pou. The Spaniard found a solution of the problem on the 10th pitch: He found a way to bypass the bolt ladder to the right, and was able to do all the moves on toprope with difficulties of 5.13b. Bad conditions prevented a clean ascent, though. The pendulum on the second pitch still seemed unclimbable.

Despite the many unsuccessful attempts by excellent climbers we summoned the courage to embark on this expedition with the goal of maybe freeing the Eternal Flame by climbing short variations.

On July 24, 2009 we arrived in base camp. Mario Walder from East Tyrol, our camera man Franz Hinterbrandner from Berchtesgaden, Alexander and I. The weather had been rather mediocre thus far and there was a lot of snow. But we were lucky, and became “good weather mountaineers”.

After 10 days, we’d established our Camp 2 on the so called Sun Terrace. We were curious and started up the wall straight away. A close look at the traverse of the second pitch confirmed what we’d guessed anyway: it was beautiful and featureless! We had to get creative, and there was another way: At the start of the traverse we climbed straight up along thin seams to a slabby, yet more featured traverse which led into the crack system of Eternal Flame. Fortunately, this all went at 5.12a. We climbed another day and then descended to base camp well tired.

Three days of bad weather provided much needed rest, until our meteorologist Karl Gabl from Innsbruck forecasted perfect conditions for the following week. For at least 6 days!

After an early start at 3 am, we reached our camp on the Sun Terrace in about 6 hours. We continued after a short break. First, it was Mario’s turn. Climbing ahead, he fixed the rope for Franz, who then filmed our ascent from above. Thus, none of the pitches were climbed twice for filming purposes. Everything was filmed and photographed live.

Alexander led the first pitch. Our goal was a team free ascent, which means that we swap leads, climbing free as a team, both leading and following with no falls from anchor to anchor.
Simple and logical. Come on Baby, redpoint, Light My Fire, a 20 meter traverse, redpoint, and another short pitch up a crack: Come Together. In the tradition of Güllich and Albert, we named the individual pitches after songs.

We were now back on the original line. We climbed another 3 pitches until wet rock put an end to our session. Ice had melted above and now water was running down the crack. It didn’t matter: That was a perfect start! The next day started with a warm-up: jugging the fixed lines. A 5.11a pitch awaited us,  it was iced-up and turned into a little adventure. Eternal Burning, the 10th pitch - this is the key to success. Iker Pou had opened the free variation to avoid the bolt ladder on this pitch.

A slabby traverse with a short and intense boulder problem is followed by an extremely icy crack. In the early afternoon the ice would certainly have turned into a waterfall. Thus not really an option, and fortunately not without alternative. Four meters further right, we find a seam which leads into the dry part of the »Pou variation« after 20 meters . We call the first pitch Wish you were here and the one after Burn for you, both go free at 5.12d. Climbing one more pitch, a perfect 5.11d hand crack, we successfully end the day.

Maybe the third day would bring us to the summit? The first three pitches above the big ledge were no problem. Amazing clibming, perfect hand cracks, but right after that we were disillusioned. Right above us, a 5.13a finger crack was waiting. Only about 15 meters long, but very thin and slightly overhanging.  It was a hurdle we wouldn’t easily take, on the contrary, it required a lot of time and effort. After a serious session working the moves, we managed to solve the problem. We also redpointed the next pitch (5.12d). It was 4 pm, and there remained two 5.11 pitches and five easier pitches between us and the summit! We were spent, and lucky that perfect weather was forecasted for the next day. It was an easy decision: “We’ll climb to the summit tomorrow.”

The fourth day was our day and we reached the top of the mountain at noon: Mario, Franz, Alexander and I. Surrounded by the giant peaks of the Karakoram, filled with great happiness. The emotions of a rock song, which had been written exactly 20 years ago by our role models Wolfgang Güllich and Kurt Albert.
We had the privilege to add a few lines. Rock’n’Roll in the wild Karakoram Mountains:
“Come on baby, light my fire! -Let’s come together! -Darling, do you feel my heart beating? -Hey, do you feel the same? - Am I only dreaming? - I wish you were here - I burn for you! - I watch you when you are dreaming - You belong to me - Say my name - Sunshine through the rain - a whole life so lonely - Erase the pain! - I don’t wanna lose this feeling - it’s the Eternal Flame!”

These are the moments we live for…

Trango (Nameless) Tower was first climbed in 1976 by the British climber Joe Brown, along with Mo Anthoine, Martin Boysen, and Malcolm Howells. There are at least eight separate routes to the summit.

After several unsuccessful attempts, the second and third ascents were achieved in 1987, with the opening of two new routes: The Slovenian Route, better known as the Yugoslav Route, a pure, clean, logical crack route on the south-southeast face, by Slavko Cankar, Franc Knez and Bojan Srot, and the Great Overhanging Dihedral Route, a spectacular and technical ascent on the western pillar, by Swiss/French team Michel "Tchouky" Fauquet, Patrick Delale, Michel Piola and Stephane Schaffter.

The first route that was freed (using fixed lines to return to a base each night), in 1988, was the Yugoslav Route by German team Kurt Albert, Wolfgang Güllich and Hartmut Munchenbach.

Another notable route is Eternal Flame (named after a Bangles song), first climbed on 20 September 1989 by Kurt Albert, Wolfgang Güllich, Milan Sykora and Christoph Stiegler. This route ascends the South-East Face of the Tower, and was climbed almost entirely free. These climbs inaugurated an era of pure rock-climbing techniques and aesthetics on high-altitude peaks.

The first female ascent, on 6 September 1990, was achieved in Free climbing style, again on the Yugoslav Route, by Catherine Destivelle (with Jeff Lowe and David Breashears).

In summer 2009, Franz Hinterbrandner, Mario Walder and Alexander and Thomas Huber did the first free ascent of Eternal Flame.

Base camp on Trango glacier
Camp 1 on the scree below Nameless Tower near a big rock at 5000 meters.
Camp 2 on the Sun Terrace at 5400 meters, there is room for 2 tents.

Our  "agency recommendation" in Pakistan for expeditions and trekkings in Karakoram