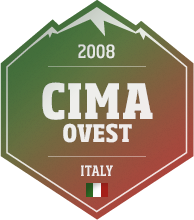 Alone, bitterly cold, loose, steep and difficult … all of these together describe the experience the  wintersolo first ascent of the route Bellavista on the North Face of Cima Ovest provided.

With their dead-vertical and overhanging walls, the Tre Cime de Lavaredo are among the world’s most famous rock formations. The fifty meter roof overhang on Cima Ovest is among the largest overhangs in the world.

In March 2000, I climbed a new route through this roof on Cima Ovest, with the goal of not using bolts for progress or protection. Bolts were reserved for anchors. During the pitches, I used pins, beaks, as well as stoppers, cams and hooks.

Apart from the high aid difficulties in the roof, I free climbed a lot on the loose rock, and with temperatures of around -10 degrees I tested my limits more than once. During four days in March I eventually climbed the first ascent of this extraordinary journey through this 500 meter wall.

The first ascent of Bellavista in winter is certainly what everyone of us considers unpleasant. It’s cold, shady, and in general… just horrible. Why would anyone do something like that?

From a alpinist’s perspective, this is easily explained. He looks for the challenge, an adventure that lets him float through every day life again. Thus, for an alpinist it is often strange if loose rock is called bad. They enjoy hanging amidst the funky loose blocks on some Tre Cime routes or in the horribly rotten rock of the Matterhorn North Face, because this is where they find the challenge they are looking for.

Apart from the adventure I expected, I got psyched for the first ascent of Bellavista for another reason: I had the feeling that the large roof of Cima Ovest  would potentially be home to one of the craziest free climbs in the world.

But just looking at it through the spotting scope and climbing the neighbouring Schweizerführe was not enough: The only way to get a look from up close was to really get there, and so I had climb the thing in order to know more.

After the five days I spent on the first ascent in March 2000 it was obvious that it was indeed possible. Along the line of Bellavista every meter can be climbed without using aid! Difficult, extremely difficult, but doable! The free ascent of this giant roof became an idée fixe and a challenge at the same time.

The warm-up consists of five demanding pitches in relatively moderate terrain. Then, as the vertical part of the face ends, it’s time for the real business. Two pitches climb the roof - with difficulties usually found at crags, with the slight difference that the protections are not bolts. In addition to that, the exposure is insane - that really makes things fun! I get unbelievably pumped, my mind wants to give up, but it’s a long way to the anchors, 55 meters in total. The journey is the destination! That is what us alpinists are looking for: The often-quoted adventure.

And that is exactly what I experienced on July 18 2001, during the first redpoint of Bellavista.

The big roof of Cima Ovest is without a doubt one of the most impressive alpine rock formations. The 40 meter roof was a highlight of the »Iron Age« when it was first climbed in 1968 by Gerhard Baur and the brothers Walter and Erich Rudolph.

In June 2007, I headed out with the South Tyrolean Martin Kopfsguter, in order to find a free climbable route through the center of the Baur-Roof. I obviously couldn’t simply follow the old bolts, instead I had to use all the natural weaknesses to free this gigantic inverted staircase.

On the first five pitches Pan Aroma follows my route Bellavista to the anchor just below the large roof. I followed Bellavista for another 12 meters, before heading the other way after a 180-degree-turn. I climbed a long diagonal line straight across the center of the roof, crossed the Baur Route, eventually finishing along several horizontal roof tops to gain the dark, vertical wall above the roof. A ten meter traverse that rises leftward puts us back into the Baur Route.

Of course, I put some effort into redpointing Pan Aroma afterwards. After a couple tries I finally succeeded on Pan Aroma on July 26th, 2007. Max Reichel and Franz Hinterbrandner were along with Martin, who belayed me, and were able to film the ascent “live”.

The climb is protected with pitons in the lower part which it shares with Bellavista. The two new pitches across the large roof spot 11 bolts in total. Friends and stoppers can thus be left in the backpack.

Pan Aroma is relatively sporty and should be about 5.14b. Compared to Bellavista, Pan Aroma offers pumpier and more physical climbing. It is also a grade harder than Bellavista, which after chipping occured is no longer the same route than the one I left at the time.

The Tre Cime di Lavaredo (Italian for "the three peaks of Lavaredo"), also called the Drei Zinnen (German, literally "three merlons"), are three distinctive battlement-like peaks, in the Sexten Dolomites of northeastern Italy. They are probably one of the best-known mountain groups in the Alps.

The three peaks, from east to west, are:

The peaks are composed of well-layered dolostones of the Dolomia Principale (Hauptdolomit) formation, Carnian to Rhaetian in age, as are many other groups in the Dolomites.

Until 1919 the peaks formed part of the border between Italy and Austria. Now they lie on the border between the Italian provinces of South Tyrol and Belluno and still are a part of the linguistic boundary between German-speaking and Italian-speaking majorities. The Cima Grande has an elevation of 2.999 metres (9,839 ft). It stands between the Cima Piccola, at 2.857 metres (9,373 ft), and the Cima Ovest, at 2.973 metres (9,754 ft).