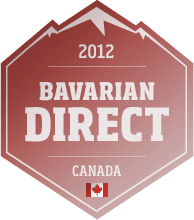 In July and August 2012, Thomas and I were on Mount Asgard in Baffin Island together with Mario Walder. Our main goal was the first free ascent of the Bavarian Direct (7/A3), which was established as an aid climb by six Bavarian friends in 1996.

On August 9, we stood on top of the South Tower of Mount Asgard, after 28 pitches with difficulties up to 5.13c and more than ten days on the wall.

While attempting to free the route, we stayed on the original line of the Bavarian Direct as much as possible, only using variations when necessary. Three years ago, a Belgian expedition had repeated the route - Nico and Olivier Favresse, Sean Villanueva and Silvia Vidal. They managed to free all but one pitch, naming their line along the Bavarian Direct “Belgarian”. Enough of a reason for us to plan an expedition to Baffin to solve the remaining puzzle on this outstanding climb.

Because of the unsettled and generally snowy weather, we had to abort our original plan to free the route in a push, and regularly returned to Base Camp. After several days and attempts on the 700m wall we achieved a “Team Free Ascent”.

Our line, which follows the Bavarian Direct, with variations along the Belgarian and two Huber-Pitches gets a rating of 5.13c or 8a+. It offers perfect clean rock and very demanding climbing up an incredibly beautiful wall.

Baffin Island (Inuktitut: Qikiqtaaluk, French: Île de Baffin, Old Norse: Helluland), in the Canadian territory of Nunavut, is the largest island in Canada and the fifth largest island in the world. Its area is 507,451 km2(195,928 sq mi) and its population is about 11,000 (2007 estimate). Named after English explorer William Baffin, it is likely that the island was known to Pre-Columbian Norse explorers from Greenland and Iceland and may be the location of Helluland, spoken of in the Icelandic sagas (the Grœnlendinga saga and the Saga of Erik the Red, Eiríks saga rauða).

Baffin Island lies in the path of a generally northerly airflow all year round, so like much of northeastern Canada, it has an extremely cold climate. This brings very long, cold winters and foggy, cloudy summers, which have helped to add to the remoteness of the island.

Spring thaw arrives much later than normal for a position straddling the Arctic Circle; around early June at Iqaluit in the south-east to early/mid July on the north coast where glaciers run right down to sea level. Snow, even heavy snow, occurs at any time of the year, although is least likely in July and early August. Average annual temperatures at Iqaluit are around −9.5 °C (14.9 °F), compared with Reykjavík, around 5 °C (41 °F), which is at a similar latitude.

Mount Asgard is a twin peaked mountain with two flat-topped, cylindrical, rock towers, separated by a saddle. It is located in Auyuittuq National Park, on the Cumberland Peninsula of Baffin Island, Nunavut, Canada.

The peak is named after Asgard, the realm of the gods in Norse mythology. Mount Asgard is perhaps the most famous of the Baffin Mountains. Asgard's slightly higher North Peak was first ascended in 1953. The South Peak was first climbed in 1971.